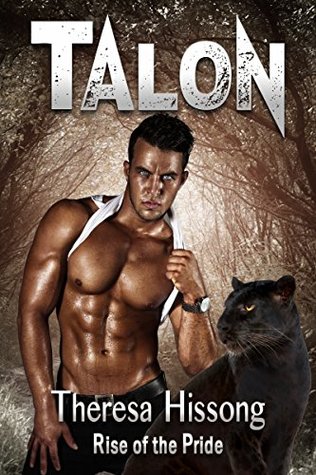 My name is Talon Shaw and I am the alpha of a pride of black panthers. My cat finds his mate in a human female and she wants a date! Panthers don’t date…we mate.

Before my plans fall into place to court the woman who is destined to be my mate, one of my pride is taken and held for ransom.

That ransom is me.

I will do anything for my pride, but my little human mate puts herself in my place. When I find out that she has been taken, along with a young girl from my pride, I vow to bring them both home. My Guardians and I hunt to find my mate, save my pride, and deal out justice for those my enemy has harmed.

That is…if I’m not too late to save them both.

Talon is the first, introductory story in the Rise of the Pride series, which looks to be a rather long ongoing series.  The kind that I enjoy most.  Ms Hissong has added some fascinating bits to Shifter lore, the most interesting to me is that a mated (or potential mate) female will feel pain at the touch of another male other than her mate.  These panther shifters know their mates not only by instinct, but by touch as well – and the avoidance of touch brings an interesting slant to Shifter lore.

While Talon does give us a lot of information, I expect that from the first story in a series.  We’ll meet the majority of Talon’s pride members, but not all, in this story and some of the humans in their small town.  This group of Shifters is a secretive as most, except they have been discovered when two panthers are photographed in their shifted forms on the edge of the forest.  Hey, everyone and their little kids now have a camera on their phones, so that’s not unexpected, more unfortunate for this pride as now Talon is forced to explain their existence, their non-threatening presence to the humans and still keep from acknowledging that there are other Shifters “out there”.

Unfortunately, the villain in this story doesn’t accept that Talon avoided acknowledging other Shifters, he sees that Talon’s non-specific answer has outed every shifter, everywhere – and in his deluded mind Talon must now pay.

Liberty owns the local bar.  She and her sister, Nova, run the place since their father’s death.  She’s always felt an attraction to the tall, handsome Talon, although she only knew him from the times he and his friends frequented the bar for food and drinks.. and man could thee guys eat.  It was fascinating and a bit exotic to discover that there were Shifters in the world – but she didn’t intend to treat them any differently than she ever did.  And no one in her bar was going to make trouble for them either.  When an accidental, casual touch alerts Talon that Liberty is his mate, he is at first torn between the fact that she is human and the need to devote himself to his pride.  Liberty is unprepared for her entrance into the Shifter world, and for Talon.  These two are in for the ride of their lives.

Talon weaves an interesting story line.  While this is a series where each story stands on it’s own and has a conclusion, there are aspects, story lines that will continue throughout the series.  I expect that, and the set up for more growth and more information is done expertly and with enough left unsaid that peaks my curiosity.

Liberty and Talon make a good couple.  Both strong willed, stubborn and totally committed to each other.  They will make mistakes and missteps along the way.  some worse than others, but at their core is a couple who will fight for each other no matter what.  I found Talon to be an engaging, at times intense story – and it certainly has my attention enough to want more.  If you enjoy Shifter Romance, an interesting story with characters that will fascinate and annoy you equally then Rise of the Pride is a series you may want to get started on.  It looks to be potentially a long series, the kind I can sink my teeth into.  And one I intend to follow to know what’s next.