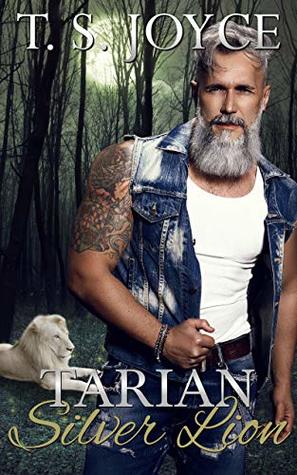 Every time I download the newest T. S. Joyce release I’ll tell myself it cannot possibly be better than the last one… and every single time I am wrong.  The newest release has always passed what came before in writing, in character development and in the creation of this unique universe.  Yet, sometimes there is a gem a diamond in the rough that sticks out for me… and TARIAN SILVER LION is just that diamond for me.

We’ve known Rose, Grim’s grandmother, from several stories back.  She’s been an important secondary character in several stories, and her presence in the story has made it richer, more believable.  But in TARIAN SILVER LION, oh my stars, how she shines as the main character, half of a couple that simply blows away any idea that age matters in steamy, sexy times or in finding true, fated love one more time.  I liked this feisty, yet serene woman in previous books… I loved her in this one, she truly comes into her own with Talon.

Talon has been through hell in the recent battle.  His injuries were severe, and it has been Rose who has nursed him back to health – even when fighting her own battles and tending her own wounds.  She might think she’s past the need for a mate, but she can still admire a mighty fine man’s form.  She’s not dead yet.  And as Talon regains consciousness and understands what’s happened around him that attraction is going to go both ways… and burn hot as well.  Now, if this were only a sultry romance between two older shifters… that would be a great story.  But, no… there is depth here that is as delightful as it is unexpected.

Talon is a runner.  In order to protect his young daughter and wife years ago, he took them on the road, moving from place to place not allowing them to have a permanent home for fear of attack.  Now his cat is accustomed to moving on, to not staying, because there was nothing to stay for.  Now Rose and Talon are burning hot romantically, but Talon is beginning to hear his cat’s insistence of it’s time to move on.  Rose has no expectations, she’s known from the start that Talon has been a runner, he is free to come or go as he needs.  She loves him, sees him as her second chance fated mate but she will not bind him to her.  Probably the most beautiful love story I’ve ever read was Talon’s postcards to Rose after he left.  Because he really couldn’t leave her so postcards became their connection.  I’ll leave it there for there are parts that I don’t want to ruin for any other reader.  Yet, that connection, that obvious show of their love and need for each other was priceless and beautiful to read.

I loved TARIAN SILVER LION so much.  It’s full of a great story, solid characters, a believable situation, some sexy times, some absolute laugh out loud moments at the reactions of the younger set, and a love story that will bring tears to your eyes and a warm smile to your lips.  This is one of my all-time favorites in the Damon’s Mountains Universe  I think there’s a good chance you’ll think so, too.