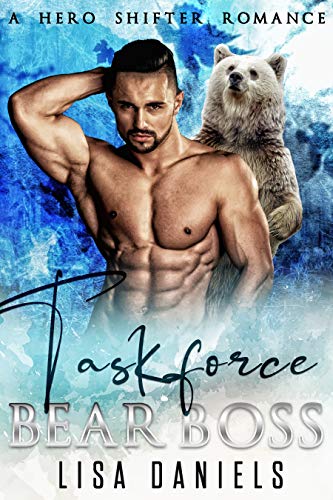 I have a hot bear boss. Shame he doesn’t interact much with us.

Horace is a shifter, a cop who leads our taskforce.

I have a little magic, which is used to help solve crimes.

We’re heroes in the city of Stoneshire – at least until a new killer hits the streets – one that even my magic can’t find.

My boss is determined to solve the case, and I’m determined to help him. It’s for the security of our city. It’s to maintain our department’s reputation.

I was surprised by Taskforce Bear Boss, pleasantly I must add so there’s no confusion.  This is a gritty, intriguing, even dark in some ways story of shifters and magic, and not always the “does no harm” kind of magic either.  The Bear Bosses of Samhain series opens with Horace and Felicity (a shifter and a magic wielder) who both are members of the police force dealing with another murder, one that bears the taint of a serial killer.  While that generalization might apply to several PNR stories there is something about the reasons behind Horace’s and Felicity’s abilities, background, and attraction that is presented to the reader in a slightly different way, one that intrigues even as it draws you further into the story.

I don’t talk about major spoilers in my reviews, if I tell you the story what’s the point of buying/borrowing the book?  So Taskforce Bear Boss begins with Horace’s intense pain over his younger sister’s death, a pain so deep that it has overtaken his life in so many ways.  He has closed himself off from people, he does his job well but doesn’t interact with the members of the force who work alongside him each day.  His hatred (and he has a good reason) toward necromancers borders on obsession.  Yet it has also cut him off from support, friendships, even from a romantic interest right in front of him.  All of that is about to change with this new case – and a determination to bring him back to the living world partner in Felicity.

Felicity’s magic basically has the ability to trace magic back to its source.  She can follow a “line” leading from a dead body back to where they were killed, in a brief explanation that doesn’t cover all she can do.  While her magic has helped this case, this taskforce’s boss has decided to bring in help from a local town, a necromancer, even knowing Horace’s history with this type of magic.  And now, the story explodes into an intense search for a serial killer, Horace coming back from his darkest place, and Felicity’s hope for something to develop between them romantically.  From now on, Horace and Felicity along with other members of the force are on a desperate quest to find a killer and prevent them from taking any more lives.  This review is a little bit more than the usual for me in the description of Taskforce Bear Boss, but it is only the tip of the iceberg when it comes to intense, emotional, or danger within this story.

I could easily say I was held captive by Felicity, Horace, and the other secondary characters in this story.  The action is fast-paced when needed, and comfortably softer, slower when that is the feeling of the scene.  There is a lot of supernatural involved here, and it will be fascinating to discover more as the series continues.  I am hooked on this dark world, and now I need to know more.  If you love a Shifter Romance or Paranormal Romance that is just a touch different than expected and enjoy watching someone be, in effect, rescued by friends and a loved one while facing danger all around them then this is a story and a series you’ll want to check out.