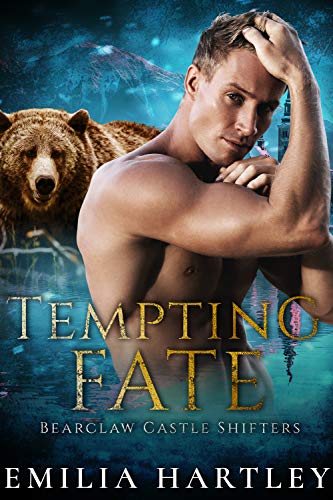 Tempting Fate starts off the Curse of Bearclaw Castle with a chilling, intriguing tale of curses, shifters, and the magic of the love of one determined mate.

Roderick has returned home, well, the vacation home where life changed horribly for his family.  The so-called castle is the last place he saw his family before the tragedy and the curse changed their fates forever.  The last place he saw his parents alive.  The last time he saw his younger brother.  And the place where Roderick intends to give in to the madness of his beast – but not until he goads his younger brother into returning for one last time together.   Bearclaw Castle has been allowed to fall into ruin, Roderick intends to repair it until his time fighting the madness is done.  It’s the final way he can think of to bring Vaughn home… goading him into facing their past one more time together as brothers.

Yet, one stubborn and determined fortune teller isn’t about to let him get off that easily for in Morgan’s opinion letting the beast have its way is only giving in to the curse… and she’s determined to break the curse, and save her mate.  Getting Roderick to cooperate on this will be tricky but she’s not giving up, not on this man or on their future.

Tempting Fate drew me in and kept me spellbound throughout.  It’s a gritty, intense, sizzling story with layers that have my imagination hooked for more from this world.  As we meet the secondary characters their contribution to this story only makes me want to get to theirs faster (which I’ll be able to since there are enough titles out now that I can binge read).

Roderick and Morgan are perfect in their imperfections and work so well as a couple.  Each equally stubborn but love (and fate) will win in the end.  Tempting Fate is a solid beginning to the series, a story that kept me flipping pages long after I should have been asleep.  I adored the banter between this couple, and the challenges they and other members of this newly formed group faced together.  If you love a really good Shifter Romance with touches of magic, foreseeing, and a curse then you’ll want to get started on the Curse of Bearclaw Castle series right now.