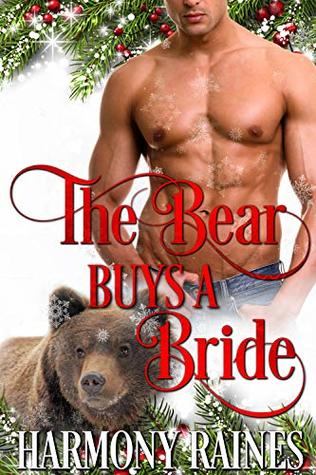 Matthew just bought his bride.   Only she doesn’t know it yet.

Bear shifter, Matthew, just bought his mate at a charity auction. Okay, so what he actually bought was an afternoon of pet pampering—he doesn’t own a pet.

Maybe he could pamper her instead?

Only he’s the bad guy, who came to town to destroy the animal shelter, so he could build luxury houses on the land.
Yes, he is the Christmas villain. But he intends to change. For Sian.

Sian is done with men. Her soon-to-be-ex-husband, Peter, was a bully who never appreciated the wonderful family he was part of but won’t sign the divorce papers and hand over the money he owes her. To make things worse, he arrived in town to embarrass her at the charity auction she’d helped arrange.

But then a Christmas miracle happened. Matthew Lewis, a billionaire property tycoon, paid a small fortune for an afternoon with her. Okay, so what he actually bought was an afternoon of pet pampering—but she knows he doesn’t have a pet.

So maybe she could pamper him instead?

Wait! Matthew is the bad guy in town. Sian has sworn off men for life. And she has two daughters who must come first.

But he’s a bear shifter and they mate for life. Can she risk her heart on a man again? Is it possible they might all get their wish and get a Second Chance Christmas in Bear Creek?

This is an Adult 18+ story that does contain language and sexual situations between mates.

Titles in the A Second Chance Christmas in Bear Creek series includes:  The Bear Buys A Bride – The Wolf Wants A Wife –

We first met Matthew and Sian back in Ronni and Lucas’ romance in Animal Rescue Bear in the Return to Bear Creek series.  I know that it’s asking a lot to suggest reading a series, or a chain of connected series from the very beginning if you’ve just begun at this point.  I get it, I do.  Yet, I would suggest that if you can go pick up Animal Rescue Bear for that story first introduces Matthew and Sian… and there is a wealth of information, and emotions on how this couple has gotten to the night of the auction that will change their lives.

Matthew made quite a first impression when he arrived in Bear Creek… and it certainly wasn’t a good one.  Yet those plans were put in motion before he’d met any of the people, shifters of Bear Creek.  Or knew that his mate was here in this small town, directly involved in those plans.  He suspected his mate was near, he knew for certain the night of the auction when they first spoke.  Now he’s done something completely out of character for him, he’s bid on a service his mate has in this auction and especially after the rude, insulting first bid by her ex his… substantially larger bid will ensure the future of the Animal Shelter, and nix his plans for good.  Matthew is about to begin his lessons in being a Good Guy, his sarcastic bear is delighted and doesn’t hesitate to send a few digs through their communications… but the reality is they’ve found their mate and from this moment on he is a changed man.  Now he simply has to convince a human woman who has been taught to not trust any man by her jerk of an almost ex-husband that he can be trusted with her future and her daughters’ as well.  Life just got interesting for Matthew and Sian in Bear Creek.

It was such a charming and fun journey to watch Matthew discover how to set aside his past and change the way he saw and dealt with the world.  It was also, at times, heartbreaking to watch Sian second guess her own feelings due to one jerk of an almost ex-husband.  Together this couple simply worked.  Despite their differences, their pasts, and even their present, it’s obvious that they fit so well together.  I loved Rachel and Ella, Sian’s daughters, who realistically question Matthew’s reasons and learn a few secrets about their new hometown.  I had fun with this story, and if you love shifter Romance, Paranormal Romance or simply a second chance at love story… then you’ll want to put The Bear BUys A Bride on your need to read list.  I’m already keeping an eye out for the next story in this series, The Wolf Wants A Wife.