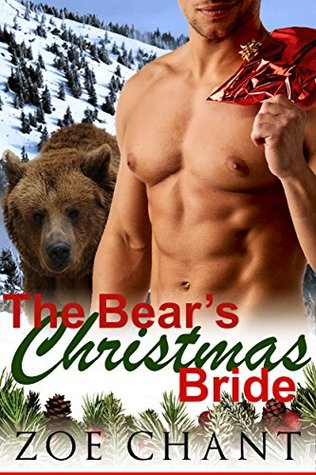 Ashley Carson isn’t feeling very merry. Her boyfriend dumped her right before Christmas, and she’s not looking forward to another holiday spent all alone. But when she arrives back home to the small town of Oakville, her family has a special gift ready: matchmaking services with local football coach Matthew Phillips! He’s handsome and new to town, but is he the right one for her?

As soon as Matt sets eyes on Ashley, he recognizes that she’s his destined mate. But will she accept his love… and the fact that he’s a bear shifter? Or will the truth scare away his mate forever?

The days are ticking down until Christmas, and Matt and Ashley don’t have much time if they want to seal their love with a kiss beneath the mistletoe. And, more importantly, Ashley’s prying relatives might keep them from finding the privacy they need for a sexy celebration! Will their Christmas be naughty… or very, very nice?

Matt has finally found  his mate, does he get to keep her?  Read on to find out my thoughts on this sexy Christmas romance.

The Bear’s Christmas Bride is a short novella that packs a powerful story punch.  Ashley is heading home for Christmas.  Alone.  Again.  No matter how she tries, the men she’s meeting or getting involved with are proving to be a bunch of users and losers.  She’s still convinced that just right man for her is out there somewhere, it’s just a matter of meeting him.  Little does she know that she’s driving straight for him – but will she be prepared to take him as he is or not at all.

Matt is a bear shifter living among humans.  He’s the local high school football coach and he loves his job – but he’s almost given up on finding his mate.  Alone he really doesn’t see how she’s ever going to walk into his life.  The last place he ever thought to catch the scent of his mate was in the grocery store aisle on Christmas Eve – really?  But there was no doubt about who this beautiful, human woman was – he knew it and man did his bear ever know it.  Now comes the hard part – convincing this beautiful lady that they were meant to be together – and oh yeah, he turns into a big, bear upon occasion.

Ashley is attracted to Matt and is even beginning to have some hope that she’s found the man for her – right up until he shares a secret with her.  One that she’s not ready to hear.  Can she put logic aside for the sake of love?

The Bear’s Christmas Bride is a charming Christmas novella that give us a very defined story with interesting secondary characters as well.  Ashley is a strong woman but Matt has tossed something amazing into the romantic mix with his bear – and she’s just not sure what to do with that information.  Which is to me an enjoyable reaction to read instead of the instant acceptance.  After all, it is a big deal and certainly not something you run into every day – so it takes some thought.  We aren’t left in doubt for very long that love will win over everything – but as a reader of Shifter romance – hell, as an addicted Shifter romance reader… it is nice to see some realistic indecision in stories every now and then.

Looking for an entertaining Shifter Christmas Romance?  Then go check out The Bear’s Christmas Bride.  It’s a fun read.