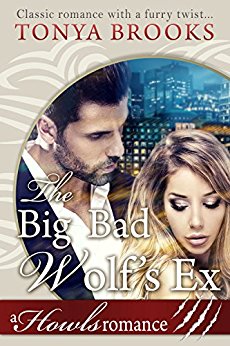 Oh my goodness.  The Big Bad Wolf’s Ex simply reached out through my Kindle, grabbed me and did not let go of my emotions from the first word to the last.  Talk about heart-wrenching,, bare bones emotional.  Just wow.  And groveling was good, maybe not enough but a good start.

Okay, let’s be completely clear here – Reece acted like a complete ass without one redeeming quality to be found anywhere near him.  At All.  He made an assumption.  He was wrong.  And now he’s going to pay for assuming something that he should have know better about in the first place.  Now I have to admit there was a rather large part of my emotions that were feeling pretty good at Reece’s pain.  Perhaps that makes me a bad person, but he had brought about this destruction of several lives and his mate bond all on his own… no one made him do this, it was all him.

And then we meet Jolie.  See how she’s been living, how she is raising their son out of necessity in absolute poverty but with hope.  How everyone in town was afraid of making the big bad wolf angry so no one would lift a hand to help or offer a decent job.  Only Reece’s brother Dane had tried for awhile.  I, once again, admired Jolie”s strength and damned Reece’s assumptions.  How could two people who obviously at one time loved each other enough to claim mates come to this… and that is the rest of the story.

In the end we have two adults who have been hurt deeply, one tiny little boy who only wants to love everyone around him and a future that could turn out so many different ways.  This story captivated me and the characters captured my emotions.  It’s one that will stick around in my head for quite a while.  And, yes, I would definitely recommend The Big Bad Wolf’s Ex.