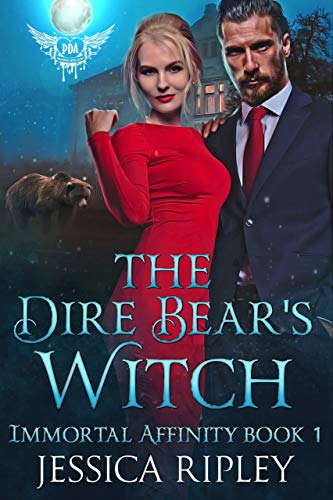 The Dire Bear’s Witch is a quick read that packs a very powerful story punch – without the steam that most readers are accustomed to in a Paranormal Dating Agency story.  Not a thing wrong with that as Slade and Dixie certainly have enough to deal with right now without tossing in anything more – there’s plenty of time, no really they have lots and lots of time for the sizzling moments.

The story description tells you the basics of what you really need to know before picking up this first story in the Immortal Affinity series.  But it doesn’t convey the emotional battle that both Dixie and Slade are enduring, each for different but valid to them reasons.  Watching two equally stubborn people come to grips with the fact that they are mates, even if they were definitely not looking for a long term situation was both fun and frustrating.  The attraction is obvious but these two are so set in their own version of reality for them that they’re willing to overlook that draw in order to remain safe and alone.

It’s the underlying troubles that both Slade, but especially Dixie must face right now that drive this story, for Dixie is a new immortal who has no idea of what she’s stepped into but is learning very quickly that there are rules that she has no choice but to follow.  There are twists and turns to The Dire Bear’s Witch that will prove very interesting as this series continues.  No, you’ll see without my pointing them out and it’s always better to make your own discoveries.  I don’t know how quickly these stories will release but I’m definitely keeping an eye out for the next title.

Leave it to Gerri to bring two equally stubborn people together in a truly forever match.  I had such fun with Dixie and Slade, they are quite amusing in their beliefs that alone is best even when they know full well that together is so much better.