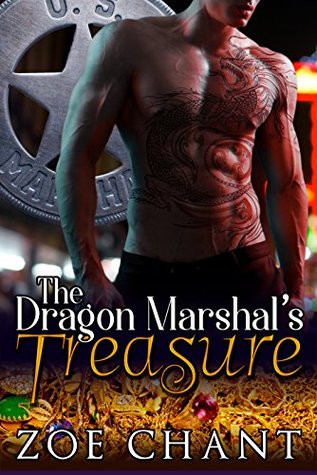 Curvy, practical Jillian has spent her life trying to distance herself from her father. But now he’s disappeared, leaving her saddled with his stolen millions, the world’s most terrifying nutcracker collection, and a US Marshal knocking on her door. A US Marshal with a strange courtly manner and deep green eyes that make Jillian wish he’d strip away more than just her unwanted inheritance…

As a dragon shifter from a reclusive, traditional clan, US Marshal Theo St. Vincent is baffled by many things in the outside world. Vending machines. Fairy tales where knights aren’t vicious monsters. Not ravishing your one true mate the instant you lay eyes on her…

Theo’s old-fashioned charm and rock-hard body soon have Jillian fully complying with his investigation. But the US Marshals aren’t the only ones interested in her father’s ill-gotten gains. With Jillian in danger, Theo has to protect his mate…even if it means breaking all the rules

For a listing of other titles you might enjoy, please visit the Zoe Chant page.

I enjoyed my time in The Dragon Marshal’s Treasure very much.  It’s a stand on its own story right now, but it certainly has the feel of the first book in a series – and there are definitely characters we meet that I’d love to see in their own story.  As always with a Zoe Chant single title, time will tell.

Theo can only be described as a courtly dragon, sexy and hot certainly, but also with an out-of-time sense about him from his choice of words to his fascination with technology, and his annoyances at some objects like vending machines.  He’s a man, a dragon, slightly out of step with his past and his present but there is hope for that to change in his future with one special lady.

Jillian’s father is a con man and a thief, even a hoarder extraordinaire on some gruesome items.  His con has finally fallen in on him and he’s disappeared leaving behind chaos, destroyed lives and his family emotionally destroyed.  Now the U.S. Marshals have stepped in to confiscate the majority of the items in his home to recoup some money to be given to his victims.  Jillian has long since moved out and chosen a path far different from her father’s insane need for wealth and things.  Still, learning what he has done to so many has finally hardened her heart toward him.  His actions have destroyed his young wife, hopefully she will be able to create a new life far away from her thieving husband.  Imagine Theo’s surprise when he meets Jillian at the home he is assessing, his mate right in front of him at the most awkward time.  He who was so certain that true mates were nothing more than a myth certainly had his eyes opened.

Jillian and Theo fall fast and hard, it was such fun watching their two different personalities mesh into a loving couple.  Certainly steamy moments occur with some chuckle worthy moments tossed in as well.  There are a few twists involved, a few more surprises as well.  The Dragon Marshal’s Treasure is funny and sexy, tender and intriguing and a very good story I’m certain most readers who love Paranormal Romance or Shifter Romance would enjoy.  I know I did, and I’ll certainly be keeping an eye out to see if this single title does indeed turn into a series.  Fingers crossed.