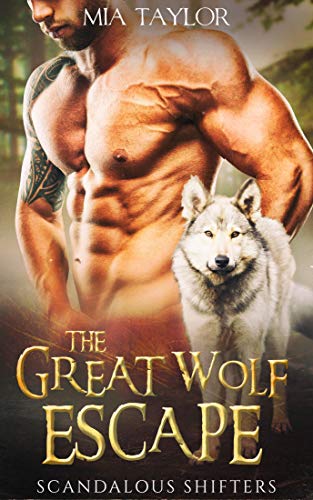 It was fitting that her name meant “the fiery one” because Serafina was hot!

Somehow, I knew from the second I laid eyes on her in that hospital that she was going to be mine for eternity.

I had a bet to win, one that would free me from the prison in which I’d been cast after being framed for a crime that my brother committed.

And the stakes were higher than any I’d ever known in this life or the next.

Everyone is conspiring against us, dark forces and light but love always wins, in the end, …doesn’t it?

Titles in the Scandalous Shifters series include – The Great Wolf Escape –

The Great Wolf Escape which begins the Scandalous Shifters series is going to prove to be very… interesting to talk about in this review.  Because, well… I don’t actually feel that I can talk about any of it except for very, very vague comments.  To say more, to pour out my thoughts about these characters and their story would definitely tell you more than any review should for you need be able to discover those surprises for yourself along the way. (In My Opinion)

So, here goes with what I feel I can safely say without spoilers.  Two brothers, Ashur and Jayce are somewhat at the center of this story.  One brother committed a horrible crime, the other brother is imprisoned for that crime, he’s taking the punishment for something he did not do.  A puppetmaster-like character, the Commodore has offered the imprisoned brother a bet, and should he win he will be freed… or the Commodore will take his place on Earth and be free to wreak whatever havoc he chooses and the brother will be stuck forever in Hell.  He has one month to find true love.  And the Commodore will not play fair – why should he?  He always wins one way or another.

Serafina has no clue that she is an immortal wolf shifter’s mate, she’s simply going about her job when she comes in contact with the innocent brother – what follows is a true mating bond/love fighting against all the tricks and deceits that are about to be tossed in their path.

I enjoyed The Great Wolf Escape, but I will toss out there that this is not your “usual” shifter romance.  I’ll also be frank and say that I’m not certain that I’ll follow the series, I’ll make that decision when the next book is released and go from there.