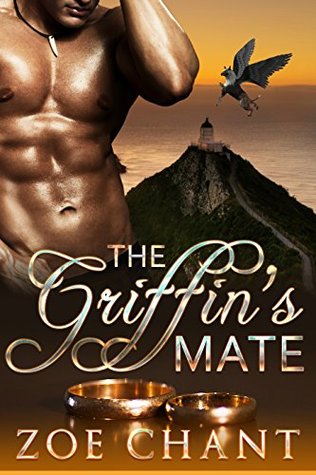 Lainie Eaves never wanted to return to Hideaway Cove, the small town where her own family rejected her years ago. When she inherits the family estate, she decides to sell the crumbling old mansion and leave her painful history where it belongs: in the past. Then she meets Harrison, and her world turns upside down.

Lonely griffin shifter Harrison Galway thought he’d found paradise when he moved to Hideaway Cove, where shifters can live without having to hide their true natures. But when his mate Lainie walks into his life, he discovers that paradise comes at a price too high to pay.

Fifteen years ago, Lainie’s grandparents made a choice that tore her family apart forever, but Lainie never knew the reason: that she wasn’t born a shifter. Now she’s finally found someone who might fill that hole in her heart—at the cost of everything else he holds dear. Hideaway Cove is a sanctuary for shifters, and that means no humans allowed.

Can Lainie let go of her painful memories, and make a fresh start? Or will Harrison be forced to leave the only place where he’s ever been welcome to live with the woman he loves?

Lainie returned to Hideaway Cove almost fifteen years after she and her family had been kicked out of this beautiful slice of paradise along the coast.  She never understood why her grandparents abandoned her, cut her off as though she never existed in the first place.  Now, here she was once again in the place that held such conflicting emotions – happy memories overbalanced by the rejection of the family who was supposed to love her no matter what.  Well, she had a purpose here.  Check out the property that came to her through her grandmother’s death.  Try to find the jewelry she knew was in that house or storage at one point – that was the only way to pay off the debts that came to her along with this unwanted house.  A fast in and out trip – not one that would change her life forever.

Harrison was on his own once his parents died.  He’d drifted from place to place, never staying long for fear of letting something slip about his true nature.  As a griffin shifter, he was the embodiment of legend but he longed for a place where he could life as the shifter he was without any fear.  He thought he’d found that when he settled in Hideaway Cove.  And right up until this morning, he’d have told you that he’d spend his final day here.  Right up until he sensed his mate.  His human mate, and humans were never, ever encouraged to hang around Hideaway Cove for long.

Lainie and Harrison’s romance is mixed up with bits of anguish, a little bittersweet, happiness, anger, and justice.  While discovering the man of her dreams, Lainie also discovers the true reason she was sent away from her grandparents so many years ago.  And the sudden move to get her out of town once again.  With Harrison at her side, they will overcome the past and make changes for the future.

I enjoyed The Griffin’s Mate very much.  It’s sexy, heartbreaking and satisfying.  I really hope that we get to meet up with some of the residents of Hideaway Cove again in the future.  So many interesting secondary characters that I would love to see get their unique tales told… maybe one day.

If you’re looking for a fast, fun read with a good solid story and interesting characters then this is one that should be on your reading list.