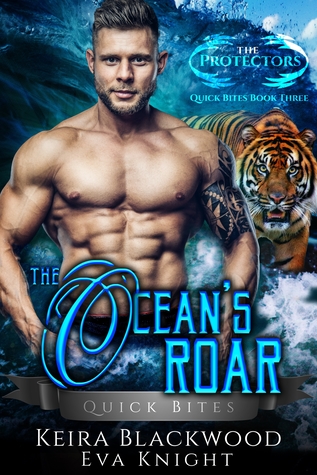 THE OCEAN’S ROAR drew me in rather quickly (as all of the Protectors books tend to do) into a unique story that blends the shifters of the land that we all know and love – and the discovery of another civilization beneath the ocean’s waves.  Bringing these two worlds together will not be easy, especially with a murderer running around and war about to break out because of it.

Vaughn and Selene make, probably, one of the most unique couples that I’ve read about – at least, in recent memory.  Their worlds are so different yet Vaughn recognizes Selene as his mate immediately.  Now comes the tricky part, solve the recent murders, prevent a war, and find a way to merge two worlds into one love of a lifetime.

On the surface, it would seem that Selene and Vaughn are total opposites – and in many ways they are – but where it matters, in the heart, they blend their two worlds together seamlessly.  We’ll run into a few familiar faces in THE OCEAN’S ROAR as well as betrayal, action-packed danger, and the discovery of another world that I’m itching to see explored.  This story is quirky, it’s sweet, it sizzles and it satisfies, I don’t know what more you could ask for in a Shifter Romance.  I’m being vague on details for I truly believe you should experience this on your own, but it is an excellent addition to the Protectors Quick Bites series.  I was engaged, I was entertained and I fell completely in love with these characters.  If you love Shifter Romance then this one should be on your need to read list.