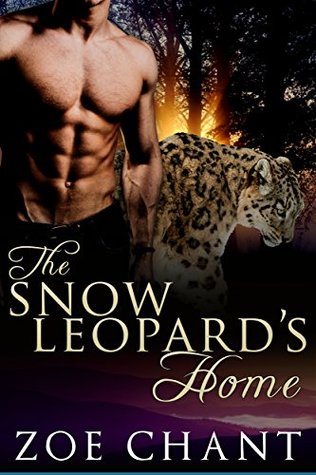 Curvy Teri Lowell is stuck at home. Three months ago, she was terribly injured in a car accident. Now she’s almost recovered—but she’s lost control of her life. Her overbearing mother is treating her like an invalid, and Teri has no job, no car, and no way to get out.

Snow leopard shifter Zach Miller has just started work as a ranger at Glacier National Park. When he meets Teri, he knows that this is a woman who’s destined to run free. She may be caught in a cage right now, but Zach can see the wild snow leopard inside Teri’s heart, and even in the face of both their families’ disapproval, he can’t stay away from his mate.

Neither Teri nor Zach can deny the passionate connection between them. But can Teri escape her family, and can Zach finally bring his mate home?

Teri had been a horrible car accident a few months past.  Broken bones, concussion, she was seriously in trouble.  At that time, it only made sense to move back in with her parents as she couldn’t work or maintain her independence in her apartment.  That was then, this is now – and she’s recovering nicely.  She’s walking, slowly yes, but she’s building up strength once more.  Yet her old family doctor keeps putting off releasing her from his care as she always seems to need a few more weeks of the help and support of her family.  It’s driving Teri crazy.  Her mother is overbearing, rude, obnoxious and belittles Teri constantly.  Treating her like a toddler once again.  Teri feels she has no choice but put up with it, but her life is about to change for the better – the very, very much better.

A chance encounter with a handsome stranger, a much needed escaping walk in the forest and the attraction for one man will change Teri’s life.  She met Zach by accident outside her doctor’s office.  They met again when she was the subject of a search demanded by her mother’s overbearing need to control her every move.  She went on a date and found everything she’d ever wanted in one man’s easy acceptance and belief in her.  Now Teri and Zach are about to take on a controlling mother and a reluctant brother in order to find their place at each other’s side.

The Snow Leopard’s Home is such a good uplifting story with touches of sadness.  Teri has been beaten down by circumstances and her family’s “love” for her, their need to know her every move and make her feel inadequate every single day.  Her mother is a selfish witch who will not let go once she has the reins over her daughter once more.  Yet, Teri will fight back once she discovers the meaning of finding her mate in Zach.  The sadness comes from knowing that there are people out there exactly like Teri’s mother, and what a lot of damage they do.

I enjoyed Zach and Teri’s romance, got a chance to catch up a bit with previous coupes from this series and met a few new folks who might someday have their own tales told… guess we’ll see on that.  I would definitely recommend this story and series to any Shifter Romance or Paranormal Romance reader.  It’s simply charming and heartwarming.