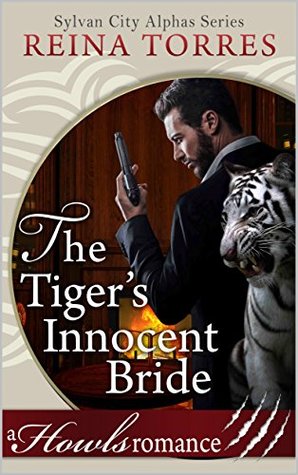 Well, it looks like I have another series of Ms Torres’ to get myself hooked on – and I’m really liking the direction of this one.  In case you haven’t noticed it this first story is in the Howls Romance line, the next is part of the Paranormal Dating Agency Kindle World, and the third (due out in March of 2018) is part of the BAD Alpha Dads… and who knows where we go from there.  So, yes.  I’m definitely loving this combining of other worlds with the Sylvan City Alphas.  As I was reading the story blurbs for the next two stories I realized that we met the main character in Devlin and Paige’s story so I’m hoping that we might occasionally run into previous couples from this new world.

In this new world the human population, for the most part, have no idea that shifters exist.  So when Devlin burst into his tiger when his mate is threatened with a gun chaos erupts along with the gunfire.  He was stepping in to save his mate’s life but not everyone sees his actions that way.  Paige felt something for this stranger the moment their eyes met, far more than gratitude.  So when they both came up with the crazy idea at the same moment, she was certain that Devlin was just as affected as she was.  It was crazy but she trusted this man, this person who could turn into the most beautiful white tiger ever.  She felt safe with a man who would put his life on the line for her.  So she became his mate and entered into a world full of mystery and danger.

I liked Devlin and Paige individually and together.  Paige becomes stronger, stands up for herself more the longer they are together.  When danger strikes she does what she can to help.  Devlin is pure power and sexiness.  He stands between his mate and the new dangers that they’ll face because of his reveal of his nature.  But nothing in the world will keep him from her side.  There are twists and turns, betrayals and people acting like the idiots a fearful of the unknown mob  always produces.

If you like fast paced action you’ll find it here.  Love those steamy sexy moments – got that covered.  Need some love in your romance  – you’ll melt at this couple.  The Tiger’s Innocent Bride pretty much has it all covered.  It’s also full of intriguing secondary characters that we’ll probably be seeing more of as the series continues.  If you love a fast paced, action filled, sexy romance series then get started on the Sylvan City Alphas series  I’m pretty sure you’ll be hooked, too.