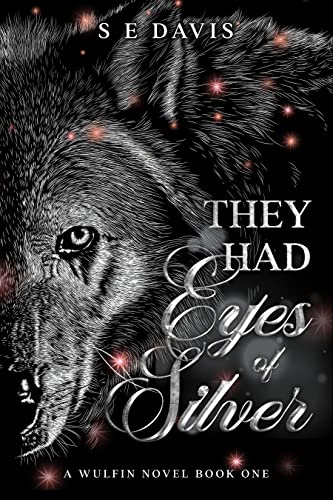 A secret lineage. A family cursed. A forbidden love that can’t be denied.

Veterinarian Reina Kirke is exhausted. So, when her best friend suggests a European vacation, she doesn’t hesitate. A much-needed break and a chance to investigate her mysterious family tree sound perfect. Too bad she’s in no way prepared for what she finds. The fairytale town in Belgium hides family secrets grounded in the supernatural. Legends of werewolves and witches surround her, and a taboo love affair threatens to pull her into a danger she might not be able to handle.

What seems like a chance encounter with Blaise Woodward, a brooding hunk with his own secrets sets up a sequence of events that could unravel both of their families as they realize their deep connection to each other is generations old. But only one thing is certain.

Their lives will never be the same…

They Had Eyes of Silver begins The Wulfin series with a story that gives a unique view of the shifter/paranormal world in a way I’ve not read before.  I was fascinated by the history that was created for this world, the story taking us into the past as well as the dangers and intrigues of the present.  There is world-building in Blaise and Reina’s story, there has to be some with the first book in a series.  Yet that world-building was woven into the dialogue and narrative quite naturally.

Blaise and his family have huge secrets, but Reina has a few of her own as well.  They’d met as teens, perhaps fallen a bit in love, then as Blaise returned to his home (wherever that might have been) and Reina returned to hers they fell out of touch.  Or so they thought.  Now, years later, a European vacation is about to open Reina’s eyes to a world she never knew existed, even when she’d been brought up on some of what she considered myths and legends.

I enjoyed my time with They Had Eyes of Silver.  If you are a fan of Shifter Romance, as I am, you may need to expand your view of that familiar world just a bit to allow for new lore to be appreciated.  There are unexpected revelations, lots of secrets, unexpected villains (beyond who we believe are the enemy), and a couple who are tied to each other in ways they never expected.