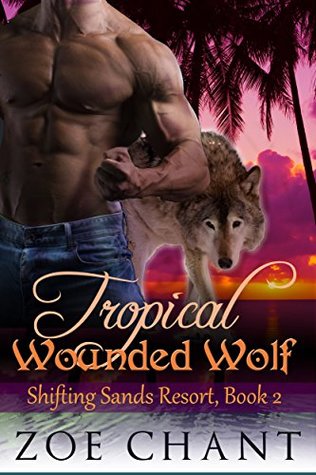 Deer shifter Mary North may be afraid of snakes, planes, tropical diseases, and strange people, but when fate hands her a solo vacation at the luxurious, all-inclusive Shifting Sands Resort, she’s determined to overcome her own timidity and enjoy herself. She isn’t prepared to meet her own mate – and find out he doesn’t want her.

Neal Byrne was an elite member of the military before he was captured and tortured in a private zoo for a collector’s amusement, forced to remain in his wolf form for ten years. He’s working at Shifting Sands now, doing whatever odd work he can find, and trying to heal his emotional wounds. He knows he’s not fit for a mate, and he’s sure the beautiful, gentle Mary would be better off without him.

When an accident traps the two in an isolated slice of paradise, injured and alone, it will take all their courage and trust to survive. Can two hurt souls find healing at last, or will their fears keep them forever alone?

We first met Neal in the first story in the Shifting Sands Resort series, Tropical Tiger Spy.  He is still at the resort, working around the property and helping the few remaining shifters who were in captivity with him.  Many have been able to move on but a few, like him, still are reeling from the long years at the hands of a vicious shifter collector.  Once a member of an elite military unit, Neal was captured while on a mission and brought to this island ten years ago.  Forced to remain in his wolf form for all those years, Neal is now at odds with his wolf and never shifts.  He’s in limbo and unsure if he will ever be fully healed mentally or emotionally.

Mary has been talked into this vacation by her best friend, who unfortunately had to cancel at the last moment.  Mary is a deer shifter born into a family of cat shifters and she’s been protected from just about everything.  Her fears are very real, and this vacation was a way to try to step beyond those fears, but now she’s on her own and even more timid than before.  To be truthful Mary is afraid of absolutely everything.  When she almost walks onto the pool deck where a handsome man is cleaning the pool she stops.  There is a draw to this stranger and while he seems to feel it too, he abruptly stalks away.  She’d never truly believed in the everyone has a mate somewhere theory – but nothing else could possibly explain the anguish of his man walking away.

I loved watching Neal and Mary overcome their fears for each other.  When danger finds them, on more than one occasion Mary shines as she learns to do what she believes she could never do.  Her mate is is serious trouble, his life is at stake and under those circumstances she discovers a bravery that is feeling comfortable.  Enough so that she’s trying a lot of things she never believed she could.  When a threat to the resort and everyone living there emerges it’s up to Neal, the staff and Mary to turn the situation around.  Bringing closure for some, and opening up future possibilities for others.

I’m hoping we’ll have more stories for the other staff members and Scarlett in the future.  I’d really like to know more about them all, and there are hints of mystery there as well that I’d definitely enjoy exploring.  So, yeah, in my imagination I’m not done with these folks and I sincerely hope that their tales get told one day.

Tropical Wounded Wolf is a story that can stand on it’s own, yet it probably would fill in some lightly spoken of events and give a better feel for what Neal and the others have gone through if you’ve read Tropical Tiger Spy.  Is it necessary, nah, but it’s a great story and would enhance this story.

I would definitely recommend this story and this series.  You’ll find likable characters, nasty villains and interesting secondary characters.