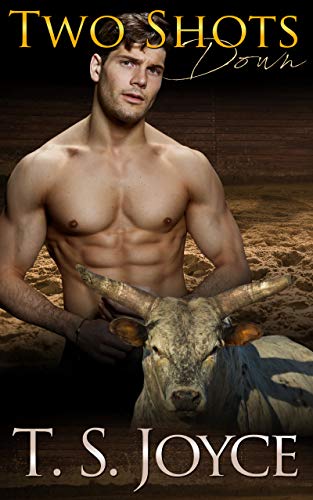 I am, quite frankly, always fascinated by the imagination of T.S. Joyce.  And this time, I believe, she’s outdone herself with the Battle of the Bulls series.  Usually, the animal and the human share a body, an outlook but, for the most part, are an equal half of the other.  This time we aren’t getting cowboys who ride bulls in the rodeo… we get the bulls who are trying their best to buck off those cowboys to deny them that 8-second victory.  That reversal of roles is reinforced by their names, the names of their bulls are used as nicknames throughout… but I found myself thinking (and substituting) Dalton whenever Two Shots’ nickname was used.

Three titan bulls, the biggest, the baddest, and the most dangerous on the circuit are about to get the representation that they never expected in the form of one woman who should hate them all with a passion since her husband was accidentally killed by Dalton when his glove wouldn’t release and he was trampled under the bulls’ hooves.  But, Cheyenne is out to prove something to herself, to the others who are on a hate campaign against her, and these three bull shifters.  She wants answers, and she wants them from Dalton – the shifter who changed her life in many ways… and is about to do that again on another level.

This series takes place in the world of the Kaid Ranch series (and we get a quick cameo but this isn’t their story so it’s just a mention).

I adored the banter between Two Shots Down, Dead of Winter, and Quickdraw – these three titan bull have an attitude, pranks, issues, and a respect for each other hidden behind barbed words, and their interactions brought a reality to their story that I cannot wait for the next books to arrive.  Dalton and Cheyenne are so good together.  Sure, there is the past to be dealt with but the passion between them, the right mate feeling makes them one of my favorite couples to date.  Add in some danger, some confrontations, a lot of giggles from the bull shifters’ pranks and actions, and a whole lot of sizzling, steamy moments and you’ll find a story to enjoy on every level.

If you love getting in on the beginning of a series, if you love a really good Shifter Romance then you’ll want to check out Two Shots Down and get started on the Battle of the Bulls series… now.