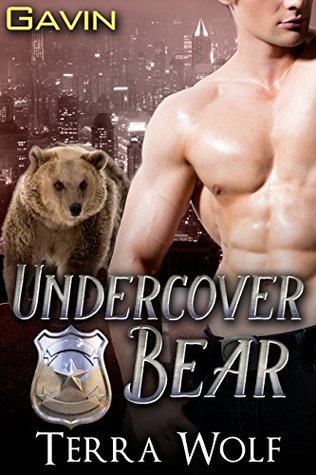 As part of an undercover shifter unit in an elite sector of Seattle’s police department, Gavin has spent his life serving his city. No one is above the law, and he does whatever it takes to protect the innocent.

Tasha never thought she’d escape the horror of being captured by Purest Inc, but after being rescued she’s now under the protection of a bear shifter. Only, it feels more like she’s lost her freedom again.

Gavin’s assignment is to keep the tiger shifter safe until she is called to testify against the organization who kidnapped her. But his strength is tested. His bear is challenged. And his heart is vulnerable as he and Tasha wait out the trial together.

Gavin struggles to keep Tasha safe, while fighting against feelings that are too hard to resist.

Remember, Shifters are highly sexual and they will always be certain that their mate is well loved – in all ways.  So this is an 18+ story.

Read on for my thoughts on Undercover Bear: Gavin.

Our story picks up pretty much where the first one ended.  Harrison has rescued Tasha from Purest Inc. and deposits her in Gavin’s car sending them off to a safe location for Tasha’s protection.  (while each story in Undercover Bear can be read as a standalone story, there are connections to the other stories)

Tasha has been through the most frightening, humiliating torment of her life.  She might be freed, but she certainly isn’t free – not with this handsome and admittedly hot detective driving her who knows where for her own safety.  She could take care of herself, dammit.  She didn’t need this man making rules with his soft, concerned voice.  No she’d be better off on her own, and she’d make that happen at the very first chance she got.  She was a tiger and she made her own rules.

The unhappy tension rolling off of the beautiful woman next to him was almost visible.  Gavin had no idea what she’d been put through while captured by Purest Inc. – but he had a really good imagination.  So he left her to her silence believing that once they got to the cabin she’d begin to feel safer with him.  The attraction he’d felt toward her had surprised him, but then he mentally shut that aspect down.  He couldn’t get involved with her while she was under his protection.  He just knew that if he did open that door he would be distracted and miss something important in the necessity of keeping her safe.  But he’d keep her alive and then when the danger was past he’d act on that attraction.

Unfortunately for Gavin’s resolve, Tasha’s nightmares had a different plan in mind one that involved comfort, passion and a lifetime.

I loved Tasha and Gavin’s story.  Suspense, passion and some amazing twists – You’ll have to read Undercover Bear: Gavin cos I’m not giving away the twists.

If you love the unique passion that only a shifter romance can bring, then you’re going to want to pick up this story and this series.  Definitely would recommend Undercover Bear: Gavin to anyone who enjoys paranormal romance, shifter romance in particular and a hot ‘n sexy couple.