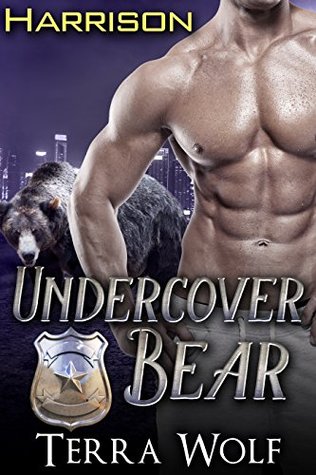 Harrison begins the gritty and intriguing series Undercover Bear.  (I have seen this series entitled with simply the character’s name and with the series as part of the title – I’ve made the choice to list them as Undercover Bear plus character’s name for my own way of keeping them straight in my mind.  I truthfully have no idea which is correct according to the authors.)

There are grizzly murders happening in Seattle.  Murder is never pleasant, but these poor souls have been tortured before death claimed them – and right now, the police have no suspects.  What has come to light is that all the victims were shifters, and that puts a different spin on the usual murder cases that this team works on.  They’re all shifters, so this hits a bit closer to home than usual.

Penny worked her sift as usual at the diner.  Her life was quite different now from the night she’d spent with Harrison.  Oh, she knew it was a one night stand and she hadn’t stayed around to be shown the door.  After all, why would a hot, handsome cop want more than one night with a totally ordinary girl like her.  But now she had even more reason to work hard, and maybe look longingly at “his table”.  Their son, Camden.  Her entire life now.

When a stranger sat down at one of her tables and requested her specifically she was curious, by the time she’d fled the diner she was terrified.  She had to find Harrison, he was the only one she trusted to keep their son safe from this threat.

Harrison is fast paced, intriguing and has a sizzling sexy couple at its core.  Harrison had wanted more with Penny and was disappointed when she left him without a word.  Yet, he  figured she wasn’t interested so he pushed down his instinct to go after her and respected her decision.  That was mistake number one – always ask if you don’t know.  Now an obviously terrified Penny was at his door – carrying a baby car seat.  And his world tilted then righted again.

Listening to Penny’s retelling of the stranger who showed such an unnatural interest in their son, Harrison trusted his instincts that told him that somehow this stranger and the unsolved murders were connected.  With the help of his team, he went undercover.  And no one expected the chain of events that decision would put into motion.

I enjoyed Harrison very much.  It sets up the ongoing series very well and leaves a satisfying feeling that even more exciting and dangerous times are in store for the members of this team.

If you’re looking for a solid story, a mystery to solve, interesting secondary characters who will eventually shine in their own stories – and just a really good romance, then this series should be on your reading list.  I would recommend Harrison to any reader who loves Shifters and a good mystery.