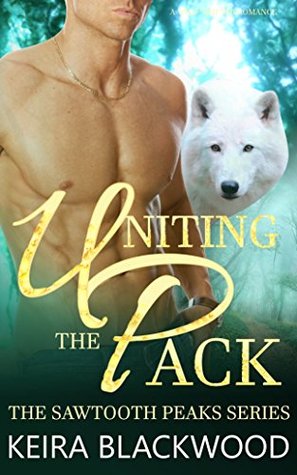 Trixie Walker is a survivor. Escaping imprisonment by the madman that murdered her mate, she’s fighting to rebuild her town, her pack, and herself. After living a life of duty, her world is thrown upside down with a single glimpse of a magnificent, sculpted stranger.

Powerful wolf shifter, Lance Tenbrook is charismatic and confident. But, after a string of meaningless relationships, finding the right woman seems hopeless until one phone call changes his life forever. With turmoil in the surrounding territories, the Sawtooth Peaks wolves look to him to choose a mate and claim his place as alpha.

Consumed by the irresistible draw toward one another, the couple is unprepared when betrayal strikes.

Read on for my thoughts on Uniting The Pack.

The really difficult thing, as a reviewer, when I come to the final chapter in any series is how much to reveal.  I need to convey just how great this last story in The Sawtooth Peaks series is without telling you so much that there is no use in even buying the book.  And I’ll tell you right now, I try my hardest to not give away major spoilers – I firmly believe that to get the full enjoyment from any story you need to read the book for yourself.

Trixie and Lance’s romance is set in the utter devastation left behind by a madman’s desire for power.  Humans and wolf shifters alike have been torn apart from the actions of one man, and those cowards who followed him and got their own thrills from following his orders.  Trixie was the mate of the Alpha of the wolves who called Ellistown home.  He had been murdered and his death haunts her still.  Theirs might not have been a love match, but he was her best friend and she mourned him with all her heart.  In the aftermath of chaos, Trixie does what she has always done, she leads her pack, the people left behind in this burned out town with so much heartache attached to every building, every life.

Lance is being pressured to take over the role of Alpha for his pack.  His half brother, Cole has married Hailey, a human – now it is up to Lance to mate with a wolf shifter and claim the leadership spot.  Except he’s never really wanted that role, and has done his best to keep to his carefree bachelor ways and not let any she wolf around town believe that they have the inside track to his heart or his possible power.

As Trixie instinctively took on the leadership role she made a call for help.  She thought she’d be speaking with Cole, but got Lance instead.  Lance had been there that night when the madman’s terror was ended, he’d been there to help rescue Hailey but even now he had only an inkling of just how bad it was for the survivors.  As he brought supplies to help start to put the town back together he met Trixie face to face for the first time.  And he knew he’d found his mate.

Their story continues with Lance doing everything within his power to help Trixie and her people.  He’s smart enough to know that she’s been through so much that showing himself as her mate is a shaky move, so instead he shows her how much he cares through his actions.  And soon enough Trixie knows that Lance is her’s as well.

As their romance becomes stronger, as they fall deeper into each other’s lives other events are happening.  There are political moves taking place by outside forces.  And one surprising betrayal that really shouldn’t have taken Trixie so off guard comes to light.

And… I think that’s all I really want to delve into.  It is a stunning ending to the series with lots of sizzling sexy times, a love that simply grows stronger with each challenge presented, some really slimy people and politics that are more corrupt than those in power realize.

I’ve really enjoyed The Sawtooth Peaks series.  And I would strongly recommend it for anyone who loves Shifter Romance and a well written, carefully thought out world where everything makes perfect sense.  It’s very easy to lose yourself in this world.