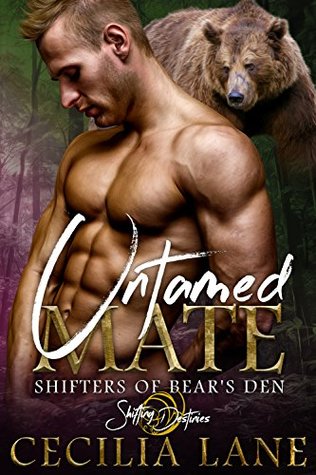 “Untamed Mate” is Mara and Hudson’s story and as we seem to be wrapping up the Shifters of Bear’s Den series to move on to the Black Claw Ranch series we get some answers directly from a character who has been present in each story since her introduction in Becca’s and Nolan’s story… yet hidden away in her cell beneath Bearden’s Town Hall serving out her sentence.  I’ll be frank and say that Mara is not a character that I like, from the moment of her introduction she gave me a bad vibe feeling and I’ve not lost that reaction to her, even now after finishing up her story.  I wish I could pinpoint why, after all, others in this series have done stupid, dumb and even harmful things and they’ve been brought into the fold with no trouble or bad reactions from me… so I don’t know why, I only know how I react to her.  Yet, I’ll also be frank in saying that my reaction to her didn’t stop my enjoyment of her romance and adventures with Hudson.

Their story is fast paced, action filled, steamy and tender all wrapped up in one amazing story of redemption, justice, forgiveness, and mates finally accepting each other with whole hearts.  I won’t say much for you should experience the heart-pounding enjoyment of “Untamed Mate” for yourself.  But it is a story that will keep you glued to the pages as you race toward the ending.  Shifters of Bear’s Den is really a series that needs to be read in order… it grows, adds more information, draws you deeper into this world with each story.  I don’t feel that you would get the full impact or understanding of complex relationships by jumping around out of order on this one, in my opinion.  I would definitely recommend this story and this series to any Paranormal Romance or Shifter Romance reader who enjoys a complicated world, likable (for the most part) characters, vile villains to loathe and a sense of a tight-knit community being built.  This is the building block of a world that will continue in the next series, and I’m definitely onboard with following along on this adventure.