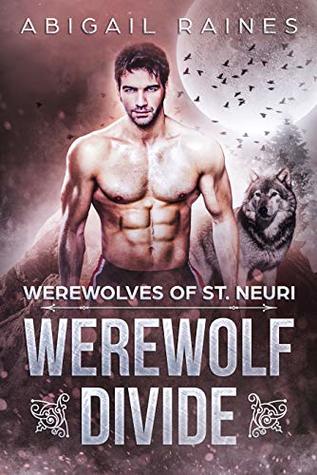 Sarah knows there has to be more to life than what she is currently doing: working a humdrum life as a real estate assistant for a boss who resents her. Living in St. Neuri has grown predictable and she can’t help but feel as though life could be more than her comfortable routine of work and reading books.

Al of that changes when the mysterious Logan rolls into her life. Hiding out in one of the homes her boss is selling, Sarah instantly feels a pull to this man. But Logan is more than he appears and meeting him pulls Sarah into a world of danger.

Her whole life is turned upside down in just a week and Logan is at the center of it. As she draws ever closer to the werewolf secrets of St. Neuri, Sarah isn’t sure if she will live to tell about it – and if Logan will want anything to do with her when it is all over.

We met Sarah, and Logan was mentioned in Werewolves of the Mountain.  Now we get their story which while not quite as spooky as Liam and Millie’s story was, Werewolf Divide is still fast-paced and intriguing.

Logan made the mistake of trusting in his so-called best friend, even when the evidence was piling up against Jin.  Now Logan is considered an outcast from his former pack, and a target is on his back for his involvement in the terrors of the nights of fog when the werewolves were in battle against each other.  He’s hiding out in a foreclosed old home, planning his next move.  Little does he realize that his future is about to walk in that door.

Sarah’s world is a safety net.  A safe but boring, tedious job that pays the bills,  An apartment in the sorta good part of town but it is her place where she hides securely behind walls.  Her former best friend is back in town, but it’s obvious that Millie is keeping things from Sarah… and that old resentment of being left behind is beginning to rear its ugly head.  When she’s forced out into a rainstorm by her boss Sarah has no idea that life as she knew it is about to change forever… or that it will change her as well.

Logan and Sarah have an instant attraction yet they both hesitate for numerous reasons, mostly of mistrust and misunderstandings.  Each will put their life on the line for the other, yet neither is willing to allow the other to protect them.  They mean well, but their actions could get them killed.  The tug and pull between Sarah and Logan drive their story.  Add in Sarah’s annoyance at how she feels Millie set her aside, is even now lying to her and you have the murky waters of not talking about the supernatural with someone who is involved with a supernatural being.

I enjoyed Werewolf Divide.  While it didn’t have the intensity of the first story (not many follow up stories could) it’s still a riveting action-filled story that will have you turning pages quickly.  If you enjoy Shifter Romance or Paranormal Romance then this story and series should be on your need to read list.