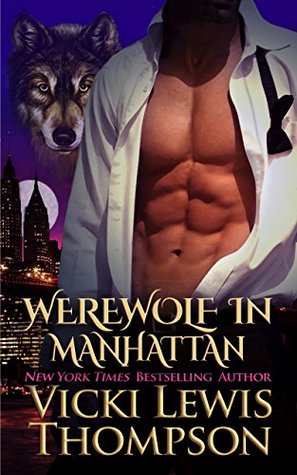 She believed werewolves were a myth…until she met one.

For paranormal romance author Emma Gavin, werewolves only existed between the pages of her novels. They were seductive heroes drawn from her imagination, not living, breathing creatures in the real world. And they certainly were not wealthy lords of industry.

And then the sexy Mr. Wallace sprouted fur.

Offering to pose as Emma’s bodyguard to deter a rogue Were should have been an easy assignment for pack alpha Aidan Wallace. She’s human. He’s Were. The two don’t mix. But he didn’t count on the temptation she would pose to his highly tuned senses. Or how hard it would be to resist her siren call.

This title has a new cover, but was previously published as A Werewolf in Manhattan… same story, just new cover and we lost the “A”.

Werewolf in Manhattan is a fun, sexy romp that delivers laugh out loud moments, definite snark at times, steamy moments and two people who shouldn’t even think about being together… but that’s all they can think about.  (Just an tidbit, this title was previously released as A Werewolf in Manhattan – it’s got a sexy new cover but the story within is the same… I will always mention this because I dislike re-buying a book already in my personal library so just an FYI.)

Paranormal Romance author Emma Gavin has created a popular world of werewolves completely from her imagination and a bit of research.  Yet, her fictional world and the real world of shifters is uncannily alike which brings the interest and scrutiny of Manhattan’s pack straight into her life.  She has no idea that the pack’s next alpha has been keeping a close, very close eye on her both at her home and out in public.  The pack’s current Alpha, Aidan’s father and some other members are very concerned that there is a werewolf informant passing along vital inside information to Emma to make her stories so true to their life.  While nothing could be further from the truth, she just has a very vivid imagination and a way with words, that conceived threat brings Aidan and Emma together.  As a security expert, Aidan has worked every trick he knows to dig deep into Emma’s life and he’s found nothing that even hints of an informant… yet, while at a book signing he does learn of a harassing email that quickly grabs his attention.  Emma may be innocent, and sexy as sin but there is another werewolf out there who could easily harm her and expose the packs.  Aidan’s assignment just got more interesting… and deadly.

I enjoyed myself in Ms Thompson’s shifter world.  To be frank, I am more accustomed to reading her cowboy romances over the years, but diving into her paranormal world was fun and entertaining.  I fell in love with Aidan, his own internal struggles with his attraction to Emma against all logic warmed my heart.  Emma… well, she’s got a few quirks that became a touch annoying.  She’s eco-demanding but isn’t afraid to add to her huge, expensive shoe collection.  She fights Aidan over the simplest things based on her dislike of the “wealthy” perks of his world, yet she’s certainly enjoying them once she’s made her high handed objections.  I don’t know, I wanted to like her for herself but I ended up accepting her because she’s Aidan’s mate.  In spite of not connecting strongly with Emma, I had fun with Werewolf in Manhattan.  There is a stalker to capture, two totally different worlds to merge and a lifetime love to fight for… can’t ask for much more action than that.  Give it a spin, I think you’ll have a blast… plus there’s more stories in the complete series to look forward to.