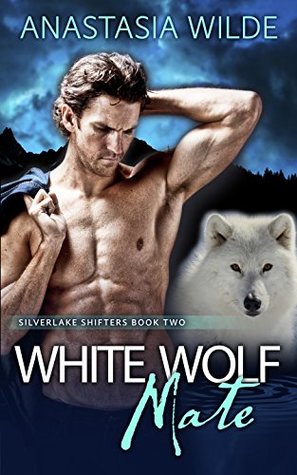 White Wolf Mate was a touching look at two people who are a bit broken inside but find a safe haven with each other.  While Rafe is the Second in his pack, the recent changes in all of his pack’s lives are weighing heavily on him.  Always a bit of an outlaw, Rafe has fought against feeling not quite good enough for his brothers, for his pack.  Yeah, he screws up but his heart is golden, even if he cannot see his value those that care about him do.  On a night where picking a fight with the wrong group of guys lead to a near disaster, it also brought him face to face with the woman who is his true, fated mate.  And she will be the most difficult and most precious cause he has ever taken on.

Terin has lived off the grid since she was found by a social outcast injured and abandoned in his woods.  With no memory of anything beyond basic skills, Terin lived in solitude until her natural nature caused her benefactor to turn on her.  She’s a loner, beyond cautious of any stranger, self-contained and able to take care of all her own needs.  She hates being around people, and needs the freedom of her woods and her small cabin off the grid in order to maintain her sanity.  When she witnesses Rafe taking a dive off of a ravine, she will put aside her fears to help this stranger – and open herself up to the possibility of love… and becoming hunted for what she is a white wolf shifter.

Even though Terin is afraid in many situations, I never saw her as weak.  Traumatized, yes.  Overly careful, definitely – but then she’s had cause to become that way.  With Rafe she opens up yet every little bit of trust is hard earned and Rafe will nearly lose her trust on several occasions for reasons he simply cannot understand.  It’s only when her hand is forced by events beyond her control that she begins to see the possibilities with Rafe.  But first they have to defeat a threat to not only Terin bu to Rafe’s pack as well.

I enjoyed White Wolf Mate very much.  It’s certainly action packed, and definitely hot and steamy sexy times are part of their romance.  But it was the two broken souls finding each other that captured my heart on this one.  Terin had to learn to trust her instincts, to trust the man she feels so much for – in spite of his living with his pack.  She’ll overcome so much, but the rewards are amazing.

If you love Shifter Romance then I’d definitely recommend this story and this series.  A good story, likable main characters and a secondary cast that will have you waiting to read their tales as well.