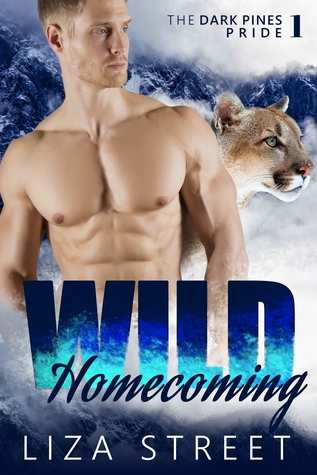 Summer Grieb is thrilled to be single. Her butthole ex stole her credit info and the resulting legal battles have pretty much thrown her off guys forever. She gets along just fine with her online friend, Jackson, with whom she exchanges messages nearly every day. He’s safe because he’s always on the road and they’ll likely never meet in person.

Mountain lion shifter Jackson Jaynes is willing to risk everything, even his relationship with his siblings, to return to the Dark Pines territory and meet the woman who sends him those funny, flirty messages. But when his return sparks a new wave of violence, he’ll have to decide whether to fight it out, or leave home again, in order to keep Summer safe.

I had been waiting for the release of Liza Street’s new series, and the wait was well worth my patience.  With gentle world building that is explained as much in dialogue as narrative we are introduced to three siblings who are constantly on the move.  Their family home, their territory no longer theirs.  Their parents killed and everything they took for granted destroyed by one vicious shifter who wanted their territory and didn’t care who died to get it.  Jackson, his brother and sister escaped with their lives and not much more but memories.  It’s been years now, wandering, never settling down, always on the move… until things change for Jackson.  A small thing at first that grows to a resolve to go home, to face the past and maybe the future as well.  What changed?  One woman, one leery, wounded and not willing to trust easily woman who has captured his interest.  Friendship, definitely.  More?  Who knows?  But the pull home is strong… and Jackson is ready to face the demons of his past, even if his brother and sister aren’t.,

Summer hid behind graphics, long distance photographs and online conversation.  She’d been burned badly by a man who not only stole her money but her identity and was racking up the credit card debt… in her name.  She vowed to never, ever trust a man again.  And she’s remained true to that vow until she started talking with Jackson.  Casually at first then everything changed when he returned home… her home now too.  With the help of one loyal, protect her back friend, Summer is taking a chance – hopefully this one won’t backfire on her again.

Wild Homecoming gets the Dark Pines Pride series off to an intriguing start.  Jackson and Summer are both wounded souls in different ways.  While Jackson is slow to believe that Summer might be his mate – Summer simply wants friendship, perhaps one day with benefits.  She hadn’t expected to fall again… and she certainly wasn’t prepared for the trouble that almost immediately began to follow her around.  The past doesn’t always stay where it belongs.  But until it’s faced there is no future.  I completely enjoyed this one.  Summer and Jackson make an interesting couple, secondary characters who will one day have their stories told but don’t try to take over this story give this romance depth and a promise of interesting tales to come.  I would definitely recommend Wild Homecoming to any Paranormal Romance or Shifter Romance reader.