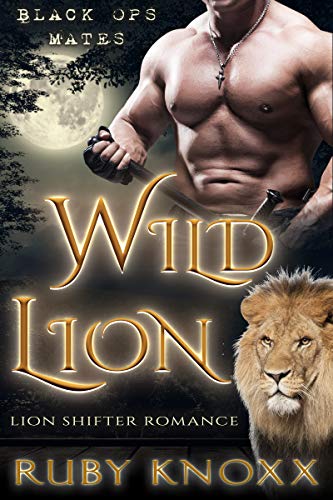 I rear-ended the car of the most delicious man in LA.

Now I need to make it up to him. Here are my options: I can pay for his damage, but I’m broke. I can give him my insurance card, but he doesn’t want it. I can be his fake fiancée for a fancy dinner. Um, what?

Yes, I am officially crazy, but I’m actually considering this. Because let’s face it, I’m not myself around this guy. He makes me feel like some hormone-crazed teenager. How long can I keep up this professional act?

He reminds me of a wild animal. A lion maybe.
And every second in his presence makes me want more. More of his touch, more of his lips, more of his … I want all of him.  Will he give it to me?

I had such fun with Wild Lion, the beginning title in the Black Ops Mates series.  It’s not a very long story but Jonas and Natalie kept my attention with chuckles and missed information between what they thought was reality and what wasn’t, at all.  And, of course, their sizzling chemistry.

Jonas and crew are part of an unknown, totally secret black ops organization and it is part of their contract that when each man finds his mate – well, his time in black ops is done.  Given how protective shifters tend to be, that makes perfect sense, even if right now none of the guys in this tight-knit group ever see themselves leaving for a mate’s sake.  (Oh, how the mighty and the arrogant will fall one day.)

Jonas and Natalie meet completely by accident, really an accident that will change their lives.  Although they parted ways then it won’t be long before fate has more in store for this couple.  But not before some serious misunderstandings on Jonas’ part, and a lot of confusion on Natalie’s are resolved to bring them their happy ever after ending.

There is a mission to get through, bad guys to vanquish, and clearing up those confusing bits of misinformation in Wild Lion. Jonas and Natalie are a fun, hot couple and it took little imagination to see them as fated mates.  We are introduced to the other men, lion shifters, who will one day have their stories told.  I’m hooked on their personalities and already need to know more.  I had fun here, and that’s the whole point.  If you love the big cat shifters, a steamy couple meant for each other, and a touch of danger then you’ll want to get started on the Black Ops Mates series with Wild Lion.