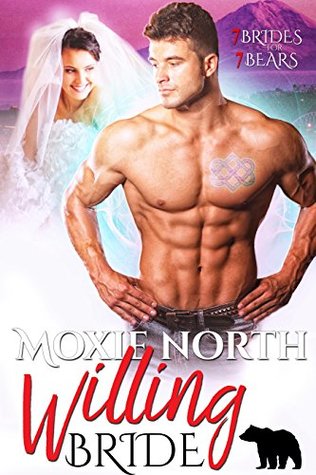 Jilted by love, stalked by obsession, protected by destiny…

King Security hires some of the best bear shifter security specialists in the business. Anson, of Clan Fehu, is one of an elite team that handles the toughest cases in Seattle. What should have been a simple escort and home security job has turned into something much more. Anson is suddenly drawn to his client in ways that he shouldn’t be, with her gorgeous trusting eyes making him feel things he’d spent years keeping locked away inside.

Twice-jilted bride, Piper Armstrong has decided that she’s just not the marrying kind; being left at the altar would make any woman wary about getting involved again. And, making matters worse, a stalker has been making her life a living hell for years, but sadly it’s the only thing in her life that has never changed. Until one day when, instead of anonymous flowers, her stalker tilts her world even more out of alignment with a “special delivery” that terrifies her and forces her seek out the best protection money could buy.

Anson and Piper’s story is intense from the beginning and that feeling only grows over time.  Willing Bride brings all of our known team members from King Security International back together again, and a few new faces as well.  I enjoy seeing support characters who have already found their mates also taking part in these stories, it creates a more believable world, for me at least.  The diversity of secondary characters is pure delight, and frankly I’m having a blast with this series.

Piper’s spirit has been broken by life, yet she’s determined to not show that in her professional life.  Until today, when something so horrendous and disgusting happens that her outer shell begins to show some cracks.  Once again her stalker has struck, only this time it feels so much more dangerous and threatening.  Once again Piper goes to the police to be told again that nothing can be done… until she is harmed by this person’s actions.  This time, however, the detective gave her a strong suggestion to seek out help from King Security International.  The private sector might be able to do more for her than the official police community could actually do.  One suggestion that will change lives forever.

I enjoyed Piper and Anson so very much that I want to talk about this story in detail… but I can’t obviously.  So how to tell you what an amazing story this is without spoilers becomes my goal for this review.  For years, beginning during her college years, Piper has had a stalker.  A person who claims to love her yet remains in the shadows.  Someone who is willing to do anything to gain her attention… hang up calls, breaking into her apartment but taking nothing, flower deliveries, and threats.  She’s changed her phone number countless times over the years, she’s moved from state to state in an effort to lose this crazy person.  All to no avail.  In addition to that stress, Piper has also loved two men, accepted their marriage proposals and each time been left standing at the alter in her wedding dress… alone.  No explanation, no excuses, nothing just not there to take the vows she believed in.  Once, maybe that’s bad luck.  Twice, no, in Piper’s view that’s the universe saying she’s unlovable, broken, unworthy and not marriage material for any man.  Too much baggage… three men have destroyed her – one Kindred will help her find herself again.

I adored Anson from the beginning.  He is attracted to Piper, even going so far as to protecting her when he’s off duty… yet he has not heard his mating call so she must not be his fated mate.  That doesn’t explain his need to protect beyond the job requirements or his attraction to her.  To him, Piper isn’t broken she’s amazingly brave.  Yes, she’s had bad luck, men who for whatever reason could not stand beside her.  That’s their loss, not hers.  He will protect her, and he will discover who has been harming her over the years with mind games played from the shadows.

And that’s where I need to stop.  I completely fell back into this world with no effort.  We get a bit more information on all of our KSI members, and I’m loving the bond between them all.  Loved Anson’s dads, they were adorable.  There are some twists in this story that are quite satisfying.  The way Anson heard his unique mating call was so moving… and the man wasted no time in getting Piper to understand just how dedicated to her happiness and safety he was from that moment on.  I had such fun with Willing Bride and would happily recommend it and this series to any Paranormal Romance or Shifter Romance reader.  Eden’s story is next and I’m so looking forward to discovering who is strong enough to handle this amazing woman.