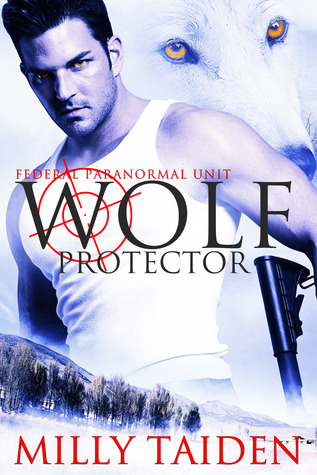 A woman with a secret…
The Federal Paranormal Unit is an elite squad of supernaturals dedicated to solving missing persons cases. Erica’s gift allows her a special connection with the crime, but it comes at a deep personal cost… Until now, she’s kept her gift a secret, even from the other members of the team. But this case will throw her together with Agent Trent Buchanan. He’s the object of her secret desires, but he’s also a cocky womanizer. She’d rather swim in shark-infested waters with a paper cut than admit she has feelings for him.

A man with one desire…
Wolf Shifter Trent wants Erica more than he’s ever wanted any woman. He’s spent years patiently waiting for her to admit that she wants him too. Working one-on-one in a race to find a serial killer, Trent’s patience and Erica’s resolve wear thin. When Trent discovers the truth about Erica, will he accept her for who she is? And can he protect her from the horrors that her gift brings?

A case that pushes them to the edge…
Erica will have to risk it all if she wants to stop the killer, and when she does, Trent may have to put his own life on the line to make sure his mate is protected.

The cover blurb for Wolf Protector gives you a very good idea of what this gripping, fast paced novel is about without my having to add any more teasers.  The Federal Paranormal Unit reminds me so much of one of my favorite television crime dramas, Criminal Minds.  Each member of the team brings their own unique, specialized talents to the search for the truly bad guys.  They function as a tight team, people who would take a bullet for any of their team members, often times more like a group of friends than co-workers.  And in reality they are both.

Trent has known that Erica is his mate since they first met.  Erica, while attracted to Trent, sees him as a player – and besides, she doesn’t do relationships.  But this case will change their dynamics.  College students are being brutally maimed and killed by a madman, and Erica’s special talents can lead them to him much faster but at a terrible toll on her.  When Trent finally understands his mate’s abilities, he will do everything in his power to protect, comfort and convince her that they belong together.  But first they have to catch a serial killer… and survive this case.

I enjoyed Wolf Protector very much.  It is an intense story, tightly wound yet gives a good balance between the crime story and the developing love story between Erica and Trent.  I would not hesitate to recommend this story (and this series) to anyone who enjoys a crime drama with a bit of the paranormal tossed in – and a very sexy love story pulling all the story lines together.

Available in paperback, audio and for the Kindle (and yes, Wolf Protector does have a newer cover now, but I show them both in case you’ve read or purchased this story before – I tend to remember covers)