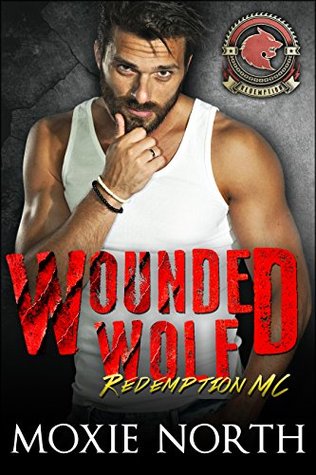 Wounded Wolf is one of those stories that within the first few pages you know you have an amazing story in your hands – then you simply hold on tight for the ride.  Maverick is the Sargent at Arms for the Redemption Motorcycle Club in Port May, Oregon.  Redemption MC is full of misfit wolf shifters, every single one has a story of why they went lone wolf and why coming under Deacon, the Alpha/President’s wing was the absolutely right thing for them… with one nasty exception, but we’ll get to that loser later on.  The name of the club fits them perfectly for they all are seeking some sort of redemption and many have found it within this group.

Maverick is no exception.  The club has become his family, his life and not only out of loyalty but also because he sees no other life for himself… ever.  You’ll learn more about his background through the story, and it’s not my place to tell you what you should read firsthand.  At this point in his life, Mav has given up any other future except the one he lives daily.  He considers himself not a whole man and as such feels he cannot protect his pack, his family and certainly not a mate.  Maverick is wrong in this and he’s proven that by being able to become the man he is now… but the mind, the emotions feel things differently than others see.  His image of himself as less than has driven him to be the man he is today.

Many people would see Prudence as a do-gooder.  That’s not what she really is but she does try to see the good in people and situations.  She believes in taking care of the earth, that color can always make any situation better and that there is good in anything if you simply look for it.  She’s also strong, spunky and not afraid to stand up for what she believes in.  She first encounters Maverick at a VA hospital while working on her latest project to help others.  She’s drawn to this man and doesn’t really understand why but he matters.  It’s obvious he wants nothing to do with her by his attitude – but she’s not giving up on him.  She can’t and that just adds to the confusion as to why this quietly rude man should mean so much to her.

He never, ever thought he’d find her.  After his injury he stopped looking and even wished to never be able to smell her sweet scent or look at her beautiful face.  Yet, here she was – his mate.

Wounded Wolf is such a compelling story of sacrifice, love, loyalty and knowing when the fates have handed you the perfect gift.  Maverick and Prudence simply work.  There is no doubt that they will make a perfectly mated pair.  She’s human but that matters not at all.  She’s determined to be in Maverick’s life and she’ll keep pushing until he lets her in.  His attempt to keep away (for her own good, of course) is slowly melting away in the warmth of this quirky, perfect for him woman.  Maverick has a lot to learn about being in a relationship, even if it is fated.  His reluctance to keep in touch with Pru while he’s away on club business has terrifying results.  That loser from my earlier comments?  Yeah, bad boy thinks he’s badder than a wolf who has found his mate and will do anything to protect her.

I truly love this story, these characters – main and secondary – this is a series to follow from the get go and that is Wounded Wolf.  I’ve enjoyed all of Moxie North’s stories and it was fun to run into “that cute librarian and her mechanic cougar shifter millionaire husband”… otherwise known as Cougar’s Gift in the Pacific Northwest Cougars series.  I have to honestly say I believe this is the best novel that Moxie North has written – that I’ve read, and I think I’ve read them all.  I wish I could find the right word to explain it… it’s deeper, it has levels that I didn’t expect yet loved every second of.  I expect some world building in the first story of a series, and I certainly got that.  All of the MC members feel like extended family (except the loser) and I’m eagerly awaiting their stories – especially Deacon.  If anyone deserves a mate and a happy life it’s this man / wolf.  I really am looking forward to that possibility.

This has been an unusually long review but I won’t apologize for loving this story.  Trust me, this could have been longer.  *grin*  If you are on the lookout for that next series to get caught up in – it would be this one.  If you don’t like motorcycle club books – this isn’t really about the MC although they do play a part.  This is shifters, lone wolves who need a family and perhaps a mate is in their future.  I believe if you give Wounded Wolf a chance to speak to you that you will discover an amazing couple with a compelling story to tell.

(I have to admit that the cover on this one really kept me thinking of the cover model’s picture every time Maverick’s name was mentioned – perfectly sexy.  It certainly wasn’t difficult to see Maverick in my mind’s eye.)