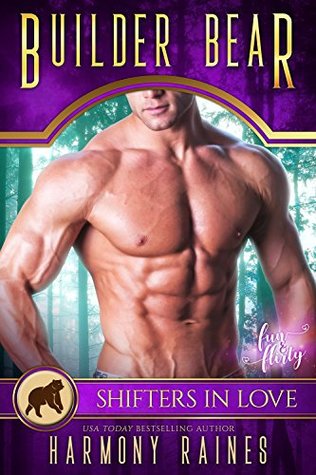 After a disastrous first marriage to an abusive husband, Haley is just about getting by. She has built a new life for herself and her two wonderful daughters with the help of her amazingly supportive friends, Tiana and Sorcha.

Will a collapsed ceiling in her kitchen ruin everything?

Money is tight and she’s not sure how she’s going to get her house fixed. Then into her life walks Buck, who is prepared to fix more than her ceiling.

Bear shifter, Buck, has worked construction his whole life. Building is what he does. And when he meets Haley and her daughters he wants to build a new life, and a new future, with them. If only Haley can let him in and see that he’s the one for her.

Can Buck convince Haley that he is the one for her? Can Haley let go of the past and learn that loving Buck doesn’t mean letting go of her hard-won independence?

Silverbacks and Second Chances series is connected to the Bear Creek/ Bear Bluff world.  Find all the titles in those series, and more on the Harmony Raines page.

I have loved the Silverbacks and Second Chances series, it simply made the Bear Creek / Bear Bluff stories a bit extra special as we got to know and enjoy these older shifters who after a life of not finding their mates suddenly have that love right in front of them… in the most delightful women who know the realities of a world that isn’t always kind.

Builder Bear gives a member of a trio of friends the chance at a wonderful life with a man who will not only love and adore her, but sees her daughters as his own from the start.  Tiana found her love and future with Mason, Sorcha has her Karl even if she doesn’t believe in forever ever after.  Haley has centered her life around her daughters, Alicia and Marie, by working hard to give them the best life she can.  She’s divorced from their father who turned into an abusive husband, seemingly overnight.  She’s not looking for any man to come rescue her, they might be poor in tangible goods but her little family is rich in love, the kind that matters forever.  So, Haley is a bit taken aback when she meets Buck for the first time.  Oh, she knows about shifters but never thought that she’d be a shifter’s mate, especially at this stage of her life.  Trusting in fate and in Buck is going to take a bit of time since Haley is human and doesn’t feel the intense knowledge that Buck does about their future.  But her mate can be a patient man, and now that he’s finally found her he’s got nothing but time to devote to her and his new family.

Buck is a self-made man.  He is dyslexic so college wasn’t for him, but he built his construction company himself from the ground up and he’s doing quite well for himself these days.  He and his good friend, Mason, are working on a joint project in Bear Creek which is why he’s in town, thinking to relocate.  That thought became a solid plan when he met Haley, once he untied his tongue and could actually talk to her like a competent, intelligent person after being thunderstruck at seeing his mate for the first time.  He knows she feels the attraction as well, but he’s also learning that Haley has rebuilt her life after her abusive ex-husband destroyed her trust in the forever kind of love.  It may take time but Buck is determined to show his lady that his love isn’t going anywhere, and that she and her daughters are safe with him.

I adored Buck.  He’s sexy and sweet all rolled up in one amazing bear shifter.  Haley has been trough so much crap with her ex.  I could understand her hesitation, but was glad to see that she didn’t draw out that caution but went with her “gut” in believing in and trusting her mate.  The ex is a colossal jerk and she is well done with him.  We also get Sorcha’s romance with Karl as a secondary story in the background.

I don’t know if there will be more stories in the Silverbacks and Second Chances series — to be honest, Builder Bear has that “feel” of a wrap up story to me, but I’ve learned never to say never, so time will tell.  I loved this story and its message and if you love Shifter Romance, then you’ll love Buck and Haley’s story.  I would definitely recommend this story and the series to any Paranormal Romance or Shifter Romance reader.

I rad this title through my Kindle Unlimited subscription.

The Last Wolf by Maria Vale

The Last Wolf by Maria Vale