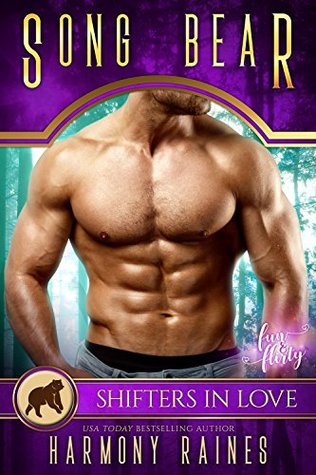 Moving to Bear Creek was a big decision for bear shifter, Elise. She left behind a life, a career, and a mountain of memories. However, the thought of watching Frankie’s children grow up, and the chance to open a new organ transplant coordination department at the hospital in Bear Bluff, persuaded Elise it was the right decision.

Then, on a morning run in the mountains, she hears a song. Not just any song. And not just any singer.

Elise lost her heart to Hank Rivera when she was fourteen. She used to lie on her bed, listening to his heartbreakingly deep voice soar with emotion. He was hers. And she was his. It didn’t matter that every other girl on the planet thought the exact same thing.

Then he disappeared. Until now.

Could it be that the Hank Rivera truly is hers?

Hank left behind a career he loved. Instead, he traveled the world, he built schools, helped those in need, and generally forgot about the world of music. Until he arrived in Bear Creek.

One morning, he picked up his guitar and strummed the notes of an old song.

His mate heard it like a siren’s call. Now she’s here, in his cabin, and his whole life is about to change.

But can this song bear make a comeback and help Elise raise much-needed funds for the transplant department? Or will he live in obscurity, overshadowed by the events of the past?

We met Elise in Fated Bear, Frankie and Adam’s story, she is the twin sister of Frankie’s heart transplant donor.  Elise has moved to Bear Creek to head up the new transplant center in the Bear Bluff hospital with special knowledge of the unique needs of shifter patients.  She misses her sister deeply but has developed a special bond with Frankie and her new twin girls who have been named after the sisters who mean so much to Frankie and Adam.  She wasn’t expecting to meet her mate deep in the woods, to hear the strum of a guitar and the words of a song take her back to a young love for a popular country singer but fate has its own time frame.

Hank walked away from a lucrative career as a popular singer and songwriter thirty years ago.  He believed  his reasons were solid, and he turned his back on not only the industry but his father as well.  He wasn’t looking for Elise but he and his bear knew she was theirs from the moment she stepped into the clearing.  He’d found his mate finally… but he would also discover so much more in the coming weeks that could change his life once again.

There are a few story-lines going on in Song Bear and each are touched on lightly.  Hank and Elise as older, mature mates make for a solid romance.  Oh yes, the sexy moments are certainly there, but they bring that unique thoughtfulness to the story and the lives they touch through their life experiences.  I loved getting to touch base with many of the characters I’ve come to love in this series.  I’d happily recommend Song Bear to any Paranormal Romance or Shifter Romance reader who enjoys a good story, steamy romance and a couple that fit together like one of Hank’s songs.