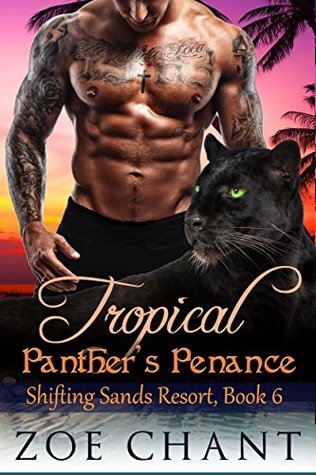 He ain’t no one’s idea of a true mate.

Panther shifter Wrench hasn’t got the first frickin’ clue about poems and flowers and all that crap. But he’s gonna learn, or die trying. He ain’t giving up on the best thing to ever happen to him. Lucky he’s got new friends at Shifting Sands Resort to teach him how to woo a lady right…

Yoga instructor Lydia and her inner swan always knew she’d meet her one true mate, but she never imagined a tattooed, six-foot-six felon. She has to have faith that he’s her perfect match…but why won’t he let her get to know the real man under those sexy muscles?

When danger from Wrench’s past comes calling, he’s suddenly got more to worry about than how to deliver a compliment without making it sound like a death threat. Now he has to protect his new home from his old boss, keep his nosy eight-year old niece out of trouble and under wraps, and win his mate. Without getting killed, sacked, or slapped.

I love the Shifting Sands Resort series by Zoe Chant.  It is frankly, a fun series that mixes sexy mates with intrigue, humor, danger and just the right amount of spice to keep it all lively and entertaining.  One day I sincerely hope Scarlet gets to find her mate, now that would be an intriguing, kick butt story.  (grin)

It’s impossible to not fall for or be charmed by Wrench.  He’s certainly not always been an “ideal hero”, he’s made choices that often put him on the wrong side of the good guys but he also had his reasons.  He’s wonderfully flawed in a realistic way that makes you root for him to continue his quest to turn his life around in spite of his past.  Wrench knows Lydia is his mate… he simply has no idea what to do about that fact.  She’s a classy lady, he’s a former thug – how’s that supposed to work out well tor them?  Wrench certainly got a lot of “help” from his co-workers and new friends, but just not too sure how much they actually helped him.  Insert foot in mouth seems to be Wrench’s daily challenge.  Lydia knows her mate is finally on the island.  She’s built her mate up in her mind so much over the years that she’s really not prepared to really meet the man who will love her for a lifetime.  Watching them work their way through discovering each other, adjusting their viewpoints and facing danger all while being consumed by the physical need for each other was funny, charming and will touch your heart.  Gotta love a guy who keeps on trying through some pretty intense blunders.

Danger has also come to the island as payback for the actions of Wrench, Jenny and Laura.  You’ll have an enjoyable time trying, along with the rest of this crew, to figure out exactly who is the bad guy this time around.

I had such fun with Tropical Panther’s Penance, and I believe you would, too.  While I suppose it’s not really necessary to read this series in order, there are overlapping situations, and each story does build on the previous in many ways.  Besides, this entire series is a delightful experience so why would you not want to read everyone’s story?  I’d recommend this story and entire series to any Paranormal Romance or Shifter Romance reader who enjoys a good story, believable characters, touches of danger, definitely steamy moments and perhaps a good laugh along the way.