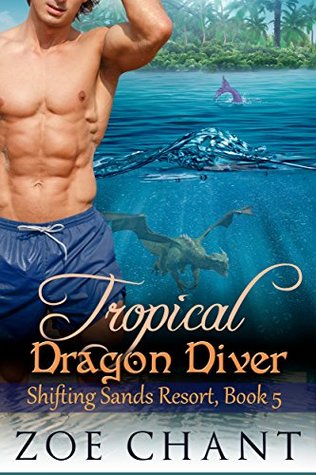 One of the many reasons I enjoy Zoe Chant’s stories is the diversity of her imagination…. and that we get to visit her worlds.  Saina is such a creature of the imagination.  Call her a siren or a mermaid, she’s fascinating, alluring and complicated.  Bastian has been a favorite member of the Shifting Sands crew and I enjoyed getting to know this sweet man better.  He’s not your typical dragon shifter, not by a long shot.  I adored his hoard, it speaks to the man, the dragon that Bastian is at heart.

There are several interesting twists to Bastian and Saina’s romance along with some very real danger.  We get to meet up with old friends at the resort once again – and I couldn’t help but chuckle at Gizelle’s protective action.  It’s just a short scene, but it certainly made me look forward to one day getting her completed story with someone as uniquely special as she is.  I had fun with Tropical Dragon Diver and I don’t want to give anything away.  If you’ve read the rest of this series then you’ll feel right at home once again – if you haven’t, then what are you waiting for?  I’d suggest starting at the beginning for characters and events do flow from story to story.