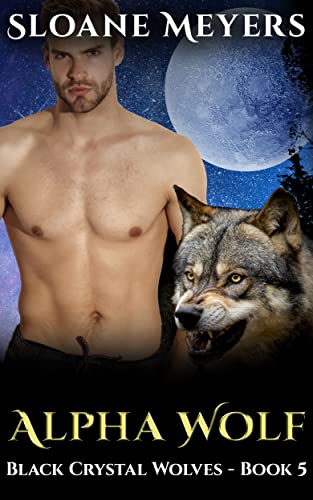 Alpha wolf Eli Haynes was born for this moment…

Eli is a shifter on a mission: to take over as alpha of the Black Crystal Clan, stopping the destruction the old alpha has been causing.  It won’t be easy, but he’s never been afraid of hard things. Besides, he has his best shifter friends to help him. He’s ready for war.

Then she walks in and changes everything.

From the first moment Eli sees Hazel Buchanan, he knows they’re meant for each other.  And he knows they can never be together.  She’s human. The Alpha of a wolf shifter clan has no business taking a human as a lifemate.  He’s torn between giving up his destiny as Alpha and giving up the love of his life.  No matter what he decides, he’ll be losing half his heart.

With every day bringing more destruction to his clan, Eli has to make his decision now. And he knows there’s only one right choice to make.  Or is there?

Eli’s clan is depending on him, but so is Hazel. Can Eli find a way to remain loyal to his clan and to true mate love?

We finally come to the fight for the leadership of the Black Crystal pack in Alpha Wolf.  The pack has been under the tyrant Alpha Damon for far too long, he’s destroyed the livelihood of so many in their community, and his dictatorship will soon come to an end… when Eli challenges him for the Alpha position.  Trouble is that Eli has discovered his fated mate, Hazel… and she’s human.  In his mind, an Alpha cannot have a human as a lifemate and hold onto that position.  Right or wrong, that’s his belief so while finding his mate has him overjoyed, having to choose between his pack and his mate is driving him to make unwise decisions… like thinking about not challenging Damon, but that cannot be a viable option, not when so many lives are at stake.  His happiness, well, that probably should come second or last or never if he cannot have Hazel in his life.

I adored Hazel.  She might not have known about Shifters but she’s certainly no pushover, she’s got grit and she proves it.  Eli has been preparing for this challenge for so long, but right now his mind is waffling between fighting and saving his pack vs living his life with his mate.  I liked Eli and understood, to a point, his confusion.  But when the time comes, he makes the right choice for himself and everyone else involved with this chaos.  I always love when we get to catch up with couples from earlier in any series.

It’s always bittersweet when a series comes to a conclusion.  But now comes the wait to see what this author brings us next.  If you love a good, solid Shifter Romance with sizzling chemistry, steadfast secondary characters who have had their stories told, and a couple to root for as they fight for their future… then Alpha Wolf is perfect for you.