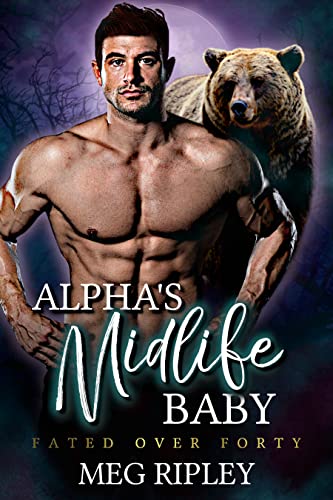 I’m fated to the Alpha, but I can’t give him the one thing he needs:
An heir.

They say life begins at forty, but when infertility led to my divorce, it seemed more like the end.

When I’d rather be at home in my sweats, binging 80s movies, my dad begs me to go to Carlton with him for moral support as he presents my much younger sister to their unmated Alpha.

We end up barging into his clan meeting— completely awkward, to say the least. But not as awkward as when I realize he’s my fated mate.

When he tells me his bear knows we’re destined to be together, we can’t help but give in to the fire between us. But he deserves to know the truth: I can never give him an heir, so it will never work.

Until, weeks later, I see the impossible: A pregnancy test with two lines.

Alpha’s Midlife Baby is the prequel to the Shifter Nation: Fated Over Forty series.  It’s a short trip showing us how this clan’s Alpha met his mate before all of the other adventures began for the (now) mates we might have already met in this series came along.

Chris has taken over the Alpha duties from his father but is still unmarried, which his matchmaking mother keeps reminding him of.  Her grand scheme this time is to bring a young woman, and her family, to him in a situation he cannot ignore their guests even though he very much wants to.  On the flip side of the situation, Nicole has no interest whatsoever in being romantically paired with this Alpha.  Bottom line is that her stepmother wants her out on her own to have daddy all to herself.  Nicole has convinced her older sister, Brandy, to come with them – it might have been their father who demanded it but it was for Nicole that Brandy left home on this useless trip.

A bear knows what a bear knows, especially when it scents its mate – which is exactly what happens to these two shifters who weren’t looking for destiny but cannot deny it when it arrives.  Brandy is divorced, mainly because of infertility issues that she must confess to Chris. knowing an Alpha needs an heir.  And the rest, as they say, is history.

I had fun seeing how the leader of this clan found himself in an awkward position of being mismatched only to find his true mate in the same family.  I love prequels almost as much as I love a good epilogue and Alpha’s Midlife Baby delivers a fun story, some steamy moments, lots of awkward situations, and a couple that is truly destined.  If you’ve read any of the other titles in this series, then you’ll want to see how it all started.