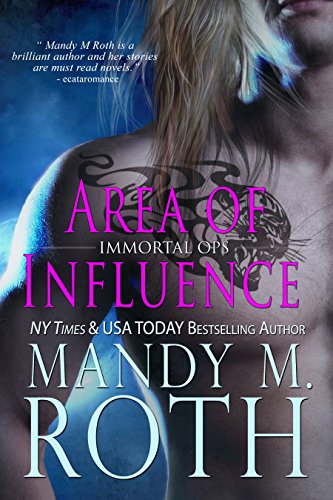 Area of Influence is the eighth title in the Immortal Ops series, a part of the connecting Immortal Ops World that I have been anticipating for most of these stories.  Why?  Because there has been a long and slowly revealed thread of an Immortal Ops operative, Lance, who was killed in action.  His “brothers”, his team-mates and friends buried him and mourned his loss in many individual ways.  Some with pain, others with guilt believing if they had “only” done whatever Lance would still be alive.  His death sent many of his friends, some already teetering on the edge spiraling into depression and actions they normally would never have taken.  In many ways, Lance’s death broke this team.

Throughout several stories, we’ve come in contact with an enemy player, Thor.  A strong presence, a being who always seemed to be just a little bit off from the average bad guy.  A man who would look the other way when those who have been imprisoned escaped.  A man who would step in to distract or engage another enemy to protect the women of the Immortal Ops teams.  A man who obviously is divided, friend or foe isn’t known for certain… even to Thor.  Each encounter with Thor we learned a little bit more – and soon, those readers who have followed these series began to “know” exactly who Thor was, even when he still didn’t.

In Area of Influence, Thor will finally take the final step to break free of the master vampire who created him, bound him, and used him for evil purposes.  Part of that freedom, that action of pieces of a puzzle finally falling into place is when Thor catches the scent of his mate while on assignment for this evil master vampire who is beginning to suspect Thor isn’t as loyal as some would believe.

Emi has secrets of her own.  Always on the run, never settling anywhere for long, she’s made the choice to stay in New Orleans for longer than she should have… and she’s about to pay the price for that as an enemy who has stalked her for years finally has her in his sights.  Emi sees and talks to dead people, but that isn’t her only ability as she will soon learn.  Emi can learn a lot about someone with a simple touch… something that will soon change lives.

On an evening, much like any other, Emi and Thor will cross paths… but Thor is not the name that is flowing through her mind when they touch.  Lance is who he is, and while Emi doesn’t understand why he doesn’t know that there is little time for questions as the enemy comes at them fast and furiously.

I’m usually very careful to skirt around spoilers – but I find that I cannot really tell you about the impact this story had on me without divulging some of the events that have already happened.  This review will end up being my exception to my own rule, I believe.

While Thor is in New Orleans on a mission from his maker – so also are several members of the “Fang Gang” of the Crimson Ops division.  When these worlds collide – good vs evil – the final pieces will drop into place as Thor disappears and Lance re-emerges from the dead so to speak, different but alive and ready to kick some serious butt.

There are so many precious moments in Area of Influence.  From compassion shown to an enemy who has no control over what has been made of them – to mates finding each other at long last – to a friend seemingly lost forever coming back to life again.  I feel bad for Emi because while she is an amazing heroine, she kind of takes a side seat to the return of Lance.  I think some of the most amazingly, emotional scenes I’ve read in these series so far has to be when friends back at headquarters finally see and man-hug Lance once again.  The past pain and the current joy just radiates through the pages.

I’m not ashamed to admit that there were tears in the final chapter.  For a story well told – for love found – and for friends reunited in the best possible way.

I read this title through my Kindle Unlimited subscription.  However, these series will be leaving KU in November of 2020, after that they can be found on most other vendors.

Available in audio, or for your favorite e-reader.