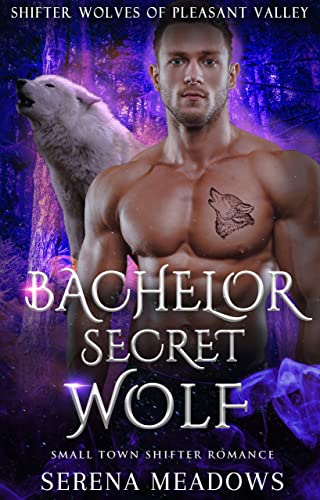 All I had to do was spy on Sheriff Dominic Stewart and save my brother’s life…
But instead, I fell in love with him.

Dominic is a wolf shifter. That was one of the reasons we could never be together.  But I desperately wanted to.

Dominic protected me with everything he had.  Even while I was looking him in the eye and lying to him.  Even when I was hiding a secret he could never find out.

But Dominic was anything but naïve.  It was only a matter of time until he figured out that I was deceiving him.

That day would ruin me.  It would break my heart… and potentially end my brother’s life along with my own.

If I knew anything about Dominic, he would never let that happen.  Even if he had to risk his own life to save mine.

Bachelor Secret Wolf is the third title in the Shifter Wolves of Pleasant Valley series – and I’m having such a good time in this world.  And although each story is complete in itself, I’d still recommend reading them in order since there is an over-arc theme to the entire series.

Annie has reached the end of her rope with her entitled, spoiled younger brother.  This time he’s pushed his luck too far and has landed them both in such danger that she can’t even think straight.  All she knows for certain is that in order to save herself and her brother’s lives she has to follow the instructions of this vicious slime-covered jerk ordering her to spy on a local sheriff.  She has no choice as she sees it, but has no idea that what she’s being sent to do will open up another world and secure her future in it.

Dominic knew the stranger in town, an obvious abuse victim was keeping secrets — but then, he had a few of his own as well.  He never expected the pull toward Annie or to finally realize that the woman he suspects is here for the wrong reasons is in fact his fated mate.  It’s going to take some time, but he’s out to win her trust and find out exactly what is going on in that beautiful head of hers.  Neither was prepared for the bonding that was starting between them, and neither was especially looking for romance at this time but when fate strikes it’s time to pay attention… even if one is in the most dangerous situation of their lives.

I adored Annie, she’s a good woman thrust into a world, a situation that she never asked for and handled it all like a champion.  Dominic is one stubborn wolf convinced that love would never have him in its grips… wrong, so wrong.  I love seeing the mighty Alpha types fall, they do it so well.  There is certainly danger around almost every corner in Bachelor Secret Wolf, there are also good townfolks who will band together to fight off one nasty piece of work.  I have no hope for Toby for it seems he will remain a whiny, entitled brat for the remainder of his days.  And I loved catching up with familiar faces from the earlier books.

I loved being back in this world and look forward to the next visit.  If you love a solid Shifter Romance full of danger, passion, laughter, and tears then you’ll feel right at home in the Shifter Wolves of Pleasant Valley series.