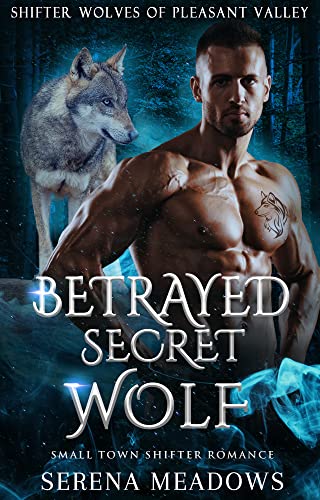 Claiming a human was wrong and forbidden, but I couldn’t keep my distance from her.
I fell in love the moment she fell into my arms after the accident.

Chloe doesn’t know of my identity as a wolf shifter. And her memory has been wiped out. The only thing she’s aware of is my love for her.
I took her in after the accident. Kept her safe when I knew a bunch of men were after her life.

I’m a protector. And in this small town in Texas, I’ve also protected secrets that could destroy the town.

Our list of enemies is growing exponentially. So would I be able to save her from the men that were still out there?

Betrayed Secret Wolf continues the Shifter Wolves of Pleasant Valley with a gripping story full of danger, vile bad guys, and amnesia – plus two strangers discovering that fated mates are a real thing even when one isn’t a wolf shifter.

Chloe was traveling towards a small town when she inadvertently saw something she shouldn’t have, or to her mind, couldn’t have when she saw men changing into wolves to attack the cattle in a field just off of the road she was traveling.  Things go from bad to worse as she tries to escape, is followed, and drifts out of her lane straight into an oncoming truck.  Her terror is obviously more than simply the crash, and as she passes out her rescuer will do some fast thinking to get her into the nearby hospital without being seen by those he suspects are behind her mad dash into town.

Chloe will awaken from the ordeal without any memory of what happened to be handed into the care of Steve, the man who rescued her (and also the owner of the truck she ran into), as they head to his cabin far from prying eyes they need to sort out if the danger she is in comes from other similar scenes happening in the area recently.  And if so, protect her at all cost until her memory returns.  In the meantime, Steve knows she is his mate, yet Chloe has no idea (that she’s aware of) that men can actually change into wolves.  In his desire to win her heart, solve the mystery, and keep the woman he has bonded with out of the hands of vile men willing to do anything to protect their cause and themselves Steve will be convinced to take her on a camping trip down the river… and right into Chloe’s memories.

I enjoyed my time in Betrayed Secret Wolf.  Chloe’s story is intriguing not only what she cannot remember but those bits and pieces she picks up slowly, especially the discovery of the caves.  I was fascinated by that aspect of their story.  I adored Steve, he wants to do the right thing but needs to protect his mate from the vile men who are out to destroy the town.  Watching them fall in love (on Chloe’s part), get through the memory loss, and solve a few mysteries was such an entertaining journey.

I hadn’t read the first story in the series, but I have purchased Discouraged Secret Wolf which will fill my need to know the entire storyline.  I didn’t feel as though I missed anything important by jumping into the second story, and there was enough natural narrative or dialogue that filled in any questions for me.  If you love a good shifter romance with likable, believable characters, a bit of mystery, definitely steamy moments, and mates discovering their future then you’d enjoy Betrayed Secret Wolf.