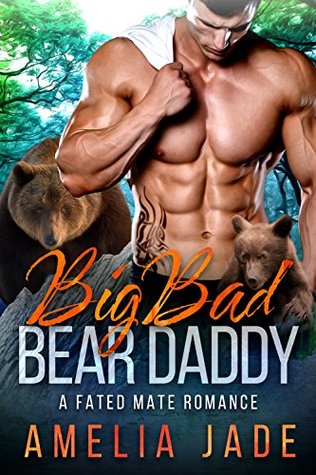 Bear-shifter and embassy guard Hector Gorchan expected that finding his mate would be an unforgettable moment, the experience of a lifetime. It’s what he was told growing up. Now that he’s an adult though, he’s realized a new truth: If his mate is a human, everything is going to be different. So when fate conspires to show him his mate in the form of the short, pregnant woman with the pink hair, he knows he’ll have to approach things differently, taking it slow so as not to scare her and her child away.

Rachel’s life has been busy since her arrival in Cloud Lake. She’s dedicated her time to setting up various support groups for the women victimized by the hideous Institute. They’re all dealing with the same issue, and she figures that having others to share their experiences with is the best thing they’ll get. It’s all she expected to have, until Hector walked into her life and stole her heart.

But just as their relationship begins to take off, they hit a patch of unexpected turbulence. A fire at the Cadian shifter embassy in Cloud Lake has left Hector in a world of trouble that threatens to engulf Rachel with it. The circumstances behind it are sketchy and coincidental as all hell, but why would anyone be out to harm him? Things only get worse when an order comes down recalling him to Cadia. Permanently. Can he find a way to fix his situation, or will fate rip their bond apart before they realize it’s there?

Big Bad Bear Daddy is full of intense, often surprising situations for our Embassy guards this time around.  Hector had met Rachel under strained circumstances in Big Bad Bear Dad.  But that didn’t stop his recognition of his mate or his determination to wear down her constant turn downs for a chance to get together.  But he was losing hope until he was encouraged to try just one more time.  Just as their romance seems to have a chance Hector finds himself in deep trouble when disaster strikes while on his shift at the embassy.  It only took a moment, but that moment was all it took to change a life.

Rachel was so busy putting together support groups for the women duped by the Institute that she found it easy to put off Hector’s invitations.  She couldn’t believe he really wanted anything to do with her and was only being nice.  She didn’t need pity.  The truth is she’s afraid to trust in her feelings for this shifter.  And eventually, with the teasing support of her friends, will give in to that one date that will change everything.

I’m going to make the choice of not saying anything more at this point in order to avoid any spoilers.  Hector and Rachel’s story is sweet and steamy, tense and dangerous.  I admit to having suspicions from the beginning – that only made the rest of the story an intense drive to the reveal.  A story line well played out, a couple who work well, and the chance to see some characters we’ve come to know acting a bit differently than we are accustomed to.  In all, Big Bad Bear Daddy is an intense. sexy, mysterious romance that I would recommend for any Paranormal Romance or Shifter Romance reader.