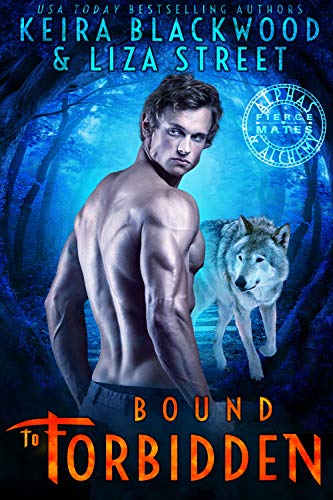 Returning to the quirky, totally paranormal small town of Forbidden is always a treat for me – yet, Anna and James just upped that enjoyment by a few notches with a fated mate, scared mate reunion with a whole lot of trouble tossed in for good measure.

Bound to Forbidden brings high school sweethearts and fated mates back together once again in a second chance to get it right romance… with a lot of nastiness going on around them.  Anna is trying to avoid seeing James again by staying at a new B & B on the outskirts of town, once an asylum this place is creepy and engaging in a weird sort of way.  She should have known that she couldn’t sneak around without getting caught, but she certainly didn’t expect that to happen quite so quickly.  For the love of her grandmother, Anna will do a lot, but give James a second chance – that she’s not so sure she can do… even if he does still own her heart, not that she’d admit that, of course.  But fate has other plans for these two – that is if the horrors that have been unleashed in Forbidden can be dealt with.

Every story in this series just draws me in deeper into this world, and I’ll admit that I don’t want to see the ending of this series any time soon.  Oh, I know it will eventually but I’m loving every moment spent here so forgive me if I don’t want to leave such a funny, icky, dangerous, sexy, and oh, horrors from the netherworld filled town.  *shrug*

Anna and James’ journey back to each other is filled with sadness, anger, regret but it’s also full of laughter, sizzling sexiness, quirky relationships, and true friends as well.  I had a blast with Bound to Forbidden and completely enjoyed being back in this world.  Yes, I’m vague on details because you really need to dive into this one yourself but you will not, in any shape or form, be disappointed in the outcome.

If you love a story full of magic and shifters, of healing and love, of horrors that need to get gone, and enough giggles to last a good week – then I’d definitely recommend Bound to Forbidden and the entire series (and connections as well).