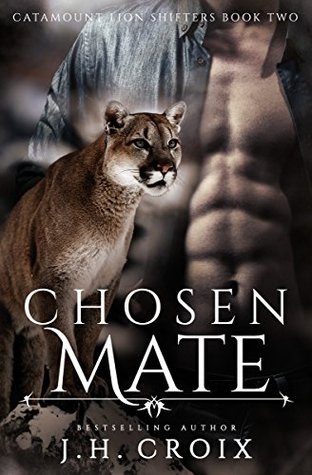 Chosen Mate pretty much picks up the woven story thread where we left off at the ending of Protected Mate.  The lion shifter community is still reeling from Callen death, and his apparent illegal activities.  While each story has it’s own tale to tell, they all are tied in with the mystery thread dealt with a bit in each story.  While you “could” read this as a stand alone story, you’ll get much more pleasure from the experience if you follow the series from the start as characters from the first story do show up later on as well.

Jake and Phoebe have been dancing around their feelings for each other for years.  She may be human, but she has shifter relatives so what Jake is does not matter one bit – but she’s scared that her feelings aren’t returned and who wants to risk a great friendship is he doesn’t feel the same way about her.  Jake feels that Phoebe is his mate, but one bad experience has him questioning his own judgement.  They’re best friends and if he’s wrong about how he thinks she feels about him… well, he’s got a lot to lose.  Yet passions cannot remain dormant forever and eventually Jake and Phoebe will take that chance on each other – and what an amazing, hot, tightly bonded couple they will become.

The mystery of Callen’s death and his activities continues bringing more danger to this community.  Mistakes will be made.  Reckless decisions soon regretted but the mystery deepens with lots of enjoyable action and twists.

I enjoyed my time in this world very much.  Each book adds just a bit more to the adventure and I’m looking forward to reading the next in line, Fated Mate.  I’m doing some serious catching up on series, but the time between reading the first story and the second hasn’t changed my enjoyment of this series at all, if possible it’s enticed me to read faster.  I would definitely recommend this series to any Paranormal Romance or Shifter Romance reader.