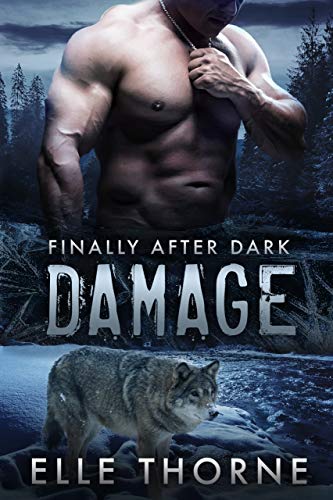 ‘Damage‘ takes us deep into Asa’s suffering as he deals with the aftermath of a study that he and his brothers were involved in… though his foster mother, Mae, had advised not taking part the brothers went ahead anyway.  Now Asa is in trouble and the most unlikely heroine will come to his rescue in so many ways.

Emme is in search of her sister and the trail leads to Alaska and the most unusual guide she’s ever encountered.  A very real, very specific danger lies ahead for Eira and Emme is desperate to find her first to warn, yes, but to fight at her side if necessary.  She never expected Asa or the world he would open up to her… or, that according to him, this Valkyre is his fated mate.

The third title in the ‘Finally After Dark‘ spin-off from the Shifters Forever World set of series is chock full of intensity, sizzling chemistry, unanswered questions, and events that neither Asa nor his three brothers have any clue about.  I feel that I need to be particularly vague for there is much in ‘Damage‘ that answers questions and opens up possibilities for the series and beyond.  I can, however, say that I was glued to the pages and read this one in one setting – yeah, it’s that good.  What I love most about any of the ‘Shifter Forever World‘ stories are the possibilities we’re presented with, and wondering when and how they will be expanded upon in the future.  It’s probably what (aside from the great storytelling) brings me back to these series time after time.

Asa and Emme will face a lot of danger in their story, but the rewards far outweigh the danger they must face if they want answers.  There are more stories to tell in this series, and we still have an ongoing thread that is flowing through all the stories – so I’m anxious to get to ‘Ravage‘ up next in the series.  I had a blast and believe that any Paranormal Romance or Shifter Romance reader would easily get caught up in this world with these characters.

I had read ‘Damage‘ when it was still in the Kindle Unlimited subscription program – it is no longer in KU, but all of Ms. Thorne’s titles are available across most platforms.