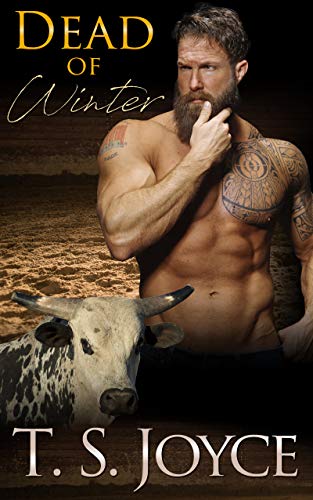 Bucking bull shifter, Dead of Winter is desperately trying to hold onto one of the top three spots in the PBSRC. He’s coming off a shoulder injury though, and he’s looking for something to keep him motivated to put his body through the strain of bucking in rodeos every week. Hints about his past are making it into the public eye, and the pressure on him is bigger than ever, but when he sees a stranger in the crowd at a rodeo, she just might be the key to turning things around. Raven looks like a tough girl, but her sweet demeanor has his bull paying attention. He’s falling way too hard, and way too fast, and he doesn’t know her intentions yet. She’s a Hagan, and those shifters are nothing to mess with. Their inner animals are territorial and ill-tempered, to say the least, but that only adds to Raven’s mystery. She could be the motivation he needs…or his downfall. Only time will tell.

Raven has a plan: meet the bull shifter who can answer questions about her biological family, and ask him how she can control her animal. Meeting Dead of Winter isn’t easy. He’s in town for a rodeo and signing autographs after he bucks, and what starts as a VIP meet-and-greet turns into a week-long adventure of self-discovery, and falling hard for the man who is teaching her all about herself. Her animal isn’t like his, or any of the rest of the herd though. She’s a lean, mean, human-stomping machine and there’s no controlling her once she’s on the loose. Dead’s options are simple—see the animal and run, or see the potential and push her to be bigger than she ever imagined. Her life is taking a drastic turn, and it’s overwhelming and exhilarating. And now, she just needs to make sure Dead, and all the people he loves, survive her.

The Battle of the Bulls series continues with the second title, Dead of Winter, and a snarky, sexy, banter-filled, funny story that has perhaps taken the top spot as my favorite T. S. Joyce story… and I’ve loved every single one that I’ve read so that’s saying something.

I just had an absolute blast with Dead and Raven.  There is very little danger/drama/angst in their story (although there is some danger toward the ending that moves us further into the series yet it’s not this couple’s danger).  Raven is adopted and knows no one with an animal quite like her’s.  She may be a cow shifter but her animal is no docile let me give you milk kinda cow… no when Raven shifts she’s an immense, angry, hate-filled creature who would just as soon maul someone as continue to have to look at them.  She’s a Hagan, and her animal means business… mean business.  Raven is traveling to the rodeo where Dead of Winter will be as she has questions about her animal that she believed Dead can answer.  That meeting is going to rock her world and change her life in so many ways.

The more I read about this herd of bulls the more I fall in love with them.  Dead is… I can’t even describe him properly.  He’s irreverent, cocky as all get out, doesn’t suffer fools lightly, a menace in the arena, and hides his past life under a devil may care attitude full of one-liners, jokes, and outrageousness.  I loved this man.  His feelings for Raven are clear as mud to him but he knows he needs her near him and he’ll do anything to put a smile on her face.

Dead of Winter is funny, full of sizzling sexiness between Raven and Dead, it’s fast one-liners and banter between mates and friends.  And throughout we’ll watch a couple fall in love, individuals begin to embrace their own selves with all their unique quirks, and friends come together as a unified front when trouble comes calling.  I easily got lost in this world and I’m ready to move on to the next one, Quickdraw Slow Burn.

I own a Kindle edition of Dead of Winter.