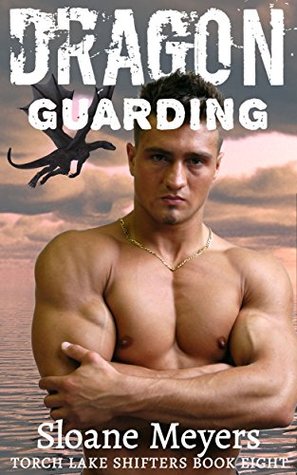 Wizard Abby Fullmer nearly died the last time she trusted someone else to take care of her, so she won’t be making that mistake again. She’s worked hard to become one of the strongest, most talented wizards in Torch Lake. Don’t ever call her a damsel in distress—she knows how to kick butt and take names. The one thing she doesn’t know how to do, though, is work on a team. She’s livid when the High Council forces her to take a dragon shifter along as “protection” on her missions. She’s determined to prove she doesn’t need him, but things get complicated when he does actually save her life. Then there’s the annoying way her heart beats faster every time he’s around. How can she push him away when she’s falling for him?

Dragon shifter Stan Keller has had more exciting summers than this one—or so he thinks. The Torch Lake High Council has asked him to keep an eye on Abigail Fullmer, a fiery wizard who is as snarky as she is beautiful. Stan didn’t move to Torch Lake to become a glorified babysitter, so he’s furious at first. But soon, Stan finds himself hopelessly attracted to Abby, and he determines to break through her tough exterior. It’s not as easy as it looks, and the more he tries to protect her, the more she pushes him away. But dragons don’t give up easily, and if it takes putting himself in mortal danger to prove to her that he’s worth her time, then he swears that’s what he’ll do. But with dark magic lurking around every corner, he should have known enough to be careful what he wished for…

Can Stan defy the odds to save Abby’s life and prove to her that he’s so much more than just another disappointment of a man? And can Abby see past the wall around her heart long enough to admit that Stan is the best partner she’ll ever have—both in fighting darkness AND in love? Read this steamy, action-packed dragon shifter-wizard romance to find out!

There isn’t a whole lot that I could safely tell you about Dragon Guarding that isn’t in the cover description.

Abby took me almost the entire book to warm up to, and then it was very lukewarm.  Stan was the draw from this story.  Abby vowed to never trust her safety to another person ever again after her father and boyfriend let her down.  Well, they were killed in the Dark War fighting against evil sorcerers who were trying to kill everyone in sight and they did indeed kill Abby’s father and boyfriend.  So to be so adamantly still angry at them was a bit of a stretch to cover the fact that she’s simply a rude, self-centered, self-absorbed wizard who believes that there is no one better than she in the town of Torch Lake… and that probably includes the members of the High Council, too.  And yes, you’d be correct in guessing that I didn’t like the character of Abby one little bit.

Stan is one of the dragons who helped Jasper in the previous story.  He thought he’d be babysitting this summer but soon realized that Abby could take care of herself… for the most part, if you didn’t count the foolish mistakes she’s making just to prove a point.  She didn’t want a bodyguard, but it’s obvious that she needs one.  The Dark Wizards are on the rise again, and Abby needs to get herself under control if she is to be of any use in this battle… a battle that may one day be to the death.

Dragon Guarding takes us a bit closer to an obvious war that the citizens of Torch Lake and the dragons are going to face once again… soon.  There are still four books until we reach that ending, and to be frank I think I’m taking a break from this series again.  I was hoping to get caught up, mainly because Ms. Meyers has a new series beginning that I’d like to get started on.  It just seems now that every book we are picking up a dragon along the way now to be featured in the next story, especially now that the recruitment for dragons has changed somewhat from the beginning of the series.  Now, it feels as though this series is being stretched out beyond when it should have ended.  And I’m sorry to say that what started as a edge of the seat series has slowly, for me, moved into the feeling of needing to finish it because I started it.  That’s not a way I want to feel about any story or series… so a couple weeks break is in order.  Here on the blog this one got a 3.5 star rating that I will round up on the posting sites.  Somewhere along the way I lost the magic of this series… and that really hurts to admit.