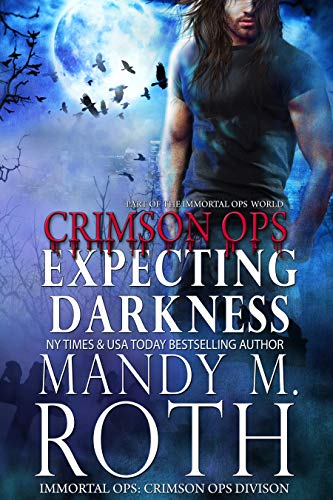 Expecting Darkness is the second title in the Crimson Ops series, a part of the connecting series making up the Immortal Ops World.  It was one of the most emotionally wrenching stories of the series (so far).  I’ll admit that I get caught up in a fictional world where characters’ lives cross very often – but this story caught me by surprise at my emotional response to it on several levels.  Absolute disgust and anger at the actions of the villains prior to Jessie’s part and the way they used both Searc and Jessie.

I always get heated at any betrayal, and that’s obvious early on in their story.  And the sadness and confusion that Searc goes through as he awakens from sleep convinced that the woman he desires but keeps a distance from is in immediate danger… yet, he’s told by her father that she is fine.  She is not.  The panic when his sire summons him to find Jessie and the answers they all will discover are devious beyond imagination – yet, exactly what Searc truly wants just not in this fashion for Jessie is his mate and she has been used to bring him to his knees.

I think I’m going to be brief here and not say much more.  I adored Searc and Jessie together, they fit perfectly (in spite of her father’s will and opinion).  What they each have gone through individually and together was enough to break their spirit, but it didn’t, it brought them together.  Expecting Darkness broke my heart on several levels at different times – but by the story’s ending, it was healed again better than ever.  One of my favorites of this series (again, so far).

I read this title through my Kindle Unlimited subscription.  This series will be going out of KU in November of 2020, after that they will be available for all vendors.

Available in audio or your favorite e-reader.