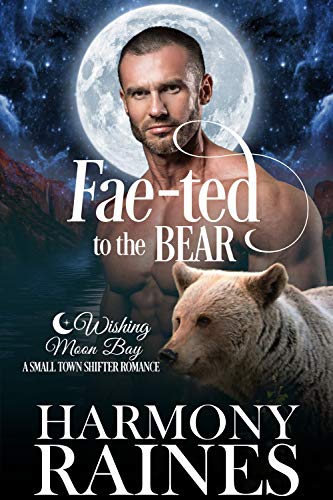 Caleb should be celebrating finding his mate. However, when a family member is threatened, he has no choice but to act.

Even if it means risking everything.

Caleb’s mate came to Wishing Moon Bay to kickstart her career after giving up on the idea of settling down and raising a family.

Can he rekindle her desire for a family of her own? Can he help her see she can have it all? With him by her side.

Elise has worked hard in her pursuit to become a chef. Seizing the chance to work with Caleb’s brother Ivan in his acclaimed restaurant, she is willing to make sacrifices to prove she has potential.

She knows she’s going to have to work hard to win Ivan over since he’s a dragon shifter and she’s a fae. Not a good mix.

However, she has one thing going for her. Caleb. Elise soon learns these brothers are willing to do anything for each other.

As she falls for the handsome growly bear shifter, Elise realizes she will do anything for Caleb, too. Especially when his sister is threatened.

Even if that means giving up her hopes and dreams.

Fae-ted to the Bear continues The Bond of Brothers (Wishing Moon Bay) series with a story that is not only intriguing by mixing shifters and the fae as mates, but emotionally as well for Elise and Caleb are going to be facing far more than his brother’s reluctance to have a fae in his kitchen.

There is a lot going on in Caleb and Elise’s story, not only are they the main characters but also Elise’s brother, Karros, and Caleb’s newly discovered sister, Zara.  Talking about this one is going to be interesting because with several smaller storylines going on at the same time… it’s easy to slip and let a spoiler get past me.

Elise has no interest whatsoever in anything romantic with this bear shifter.  She’s in town for one thing only – to get Chef Ivan to allow her to train under him for her greatest desire is to continue her culinary training and whatever comes beyond that knowledge.  Finding out that Caleb believes she’s his mate is not at all what she expected or wanted from this trip to Wishing Moon Bay.  Yet, dragon shifters and fae do not mix well together, at all.  And Elise will be grateful for Caleb’s help in convincing Ivan to allow her to learn in his sacred kitchen… for you do not mess with Ivan’s kitchen, just saying.

I adored Caleb.  He’s not the least bit pushy about finding his mate, in fact, he’ll step away if that is her true desire but first he needs to help his mate and her brother get settled and simply hope for the best over time as Elise gets to know him.  A complication comes when Caleb needs to go to his sister as she feels she is being watched – so two couples and one single man take off for a road trip that will change a lot of lives… eventually.

I love the cross with the Bear Creek world and especially love it anytime I get to spend time with Fiona.  There will be a few reveals that might come as a surprise and will definitely be adding to the overall appeal of this series for me.  I enjoy puzzles, and we’ve been handed one in Fae-ted to the Bear.

The sizzling chemistry between Caleb and Elsie is expected, the banter between all the couples and the singles often gave me a good chuckle.  I had fun here, and I’m trying to not say too much – so, if you’ve enjoyed this series so far you’re in for a treat with this one.  And if you haven’t started it, well, you should but it’s a good idea to go back to the first one because parts of the stories do build on each other.

**This review originally appeared on my Paranormal-y Romantic site but has been added here because it also belongs with the Shifters. 🙂 **