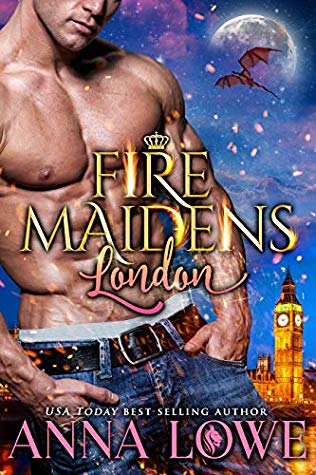 FIRE MAIDENS: LONDON is the second story in the Fire Maidens – Billionaires & Bodyguards series, which is connected to the Aloha Shifters: Jewels of the Heart and Aloha Shifters: Pearls of Desire series.  You do not have to have read the Aloha Shifters to enjoy this one, but I would highly recommend them for they are amazing stories that will get you hooked quite quickly on this particular world.

We met Liam in the previous story and he’s now in London taking up his Guardian duties and not liking this new location one bit since the lions here are quite – well, uppity might be the nicest thing about this crew of lions who believe they are at the very top of the order of all shifters (they are not, they’re just old enablers who are so entrenched in their past glories that they now do almost as much harm as good).  When he steps in as a man or rather, a shifter, is harassing a young woman Liam suddenly senses that this is his mate – and he is a bit flabbergasted since he’s never really looked for his mate knowing his background and lineage.  Parted without even knowing her name, Liam must head to duty only to learn that his mate is the target of the lions of London as well as some evil dragon shifters.  One he knows how to fight, the other, well, that’s going to take some cunning and planning.

It took me a couple of chapters to really begin to like Gemma, her attitude was… annoying – but, of course, as the reader, I know far more facts than she does.  Yet she certainly is a stubborn, headstrong woman.  I adored Liam and often felt his confusion as his story unfolded.  Together they are magic, but it took a bit for that magic feeling to take hold of me.

I enjoyed FIRE MAIDENS: LONDON very much.  I finally realized what I was missing from the first story (and this one) in this new series – the men are basically on their own with perhaps one other shifter to turn to for help.  They truly are just as dependent on as they are protective of their mate.  To be frank, I do miss that sense of a crew, of others having the hero’s back or just plain comradery and friendship.  That doesn’t take away my enjoyment of these shifters, only that I seem to prefer a larger group of secondary characters connected on a deeper level – these shifters have no true crew, pride, pack and I find I miss that for them and for me… in my own opinion.

If you love a really good shifter tale then you’ll want to get started on this series, I’d recommend starting from the beginning but no matter what order you read you will find steamy moments, danger, true mates, and some surprises along the way.