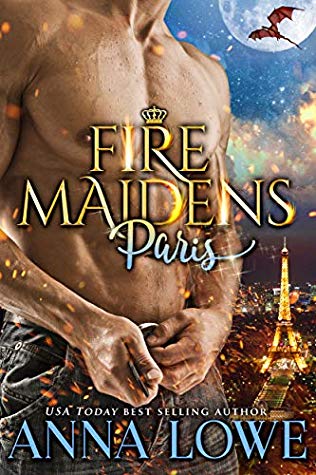 FIRE MAIDENS: PARIS begins Anna Lowe’s new series, Fire Maidens – BIllionaires & Bodyguards with a story that will quickly draw you into this new world full of history, rivalry, and danger.  This time around we’re going to run into far more supernatural creatures than shifters so keep your eyes open and the lights on.

I’ve been waiting – impatiently – for this series to begin since Ms. Lowe announced it at the ending of the Pearls of Desire series.  There is world-building in this first story, there has to be for we are moving into uncharted territory from the beauty and sultry nights of Hawaii into the old world of Europe.  Yet, there was never an information dump as the background we need to know flows easily through descriptions and dialogue.  Most of what you need to know is in the Cover Description.  The rest is really my reaction to a very good introduction to this new world.

Tristan and Natalie are drawn together through danger, then through Tristan’s knowledge that Natalie is his mate.  That fact won’t matter to the Guardians of Paris who see Natalie as one of the Fire Maidens who will protect their beloved city from not only corrupt supernaturals but other potential disasters as well.  Following this couple through the minefield of their romance was gripping most of the times, at other times humor shines through just when the intensity needs breaking.  Natalie is a strong young woman who doesn’t always show that yet back her into a corner and she’ll cut you.  Tristan is ex-military, a protector of the city on the search for supernaturals up to no good… and we discover that there are plenty of those around.

FIRE MAIDENS: PARIS is an excellent introduction to the series with likable characters, and despicable villains as well.  And sometimes, by their actions, you aren’t really sure which side some are truly on.  I was easily caught up in this world and the next story cannot come fast enough for me.  If you love Paranormal or Shifter Romance, if flipping pages quickly to find out what happened is your reading speed, and if a couple who were meant for each other but has to fight outside forces to be together is one of your favorite types of romance — then have I got a book for you.  I had a blast in this world and I’m fairly certain that you will, too.

I own a Kindle edition of Fire Maidens: Paris.