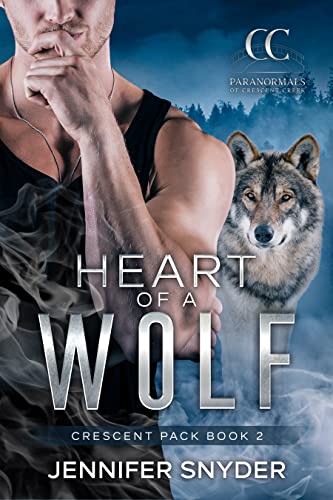 He’s a jokester. She’s serious. They’re exact opposites, but his wolf knows she’s the one. Will their differences stand in the way of love?

Jameson Lawrence might be young and come off as slightly immature sometimes, but he’s a dang good carpenter. When he’s asked to do a repair job for the older sister of his alpha’s mate, he doesn’t turn it down. Not even when she writes him off after a single glance.

Liv Beverly has always been too serious and practical for most, she’s loyal and protective of those she cares about to a fault and doesn’t date younger guys. However, the hot carpenter who randomly showed up in her backyard is about to make her question everything she thought she knew about herself.

But when a threat is spotted lurking around Liv’s house, the fun and games between the two come to an end. Jameson vows to protect her, but will she want him to once she learns he’s a wolf shifter, or will she see him as a threat too?

I completely adored Jameson.  He’s funny, sexy, and so protective of the woman who is his mate that he’ll put up with a lot in order to convince her that age is no factor when it’s obvious that they belong together.

I feel that in order to fully understand Liv you need to read the first story in this series, Promise of a Wolf because there are valid reasons why she is so overly protective of her sister.  Yes, Liv can certainly get on one’s last nerve in her suspicious mindset, her need to know everything that is happening in Nadine’s life… but she’s doing all that because she’s afraid to trust that the new man in her sister’s life won’t be just like that previous abusive jerk.

Add to that obsessiveness a younger man who is showing interest in Liv… something she’s just not ready to give control of any sort to.  Liv is complex, and to really enjoy her romance you (or I) needed to cut her some slack in seeing why she acts the way she does.  I loved watching Jameson slowly, steadily break down Liv’s walls to allow her to see the reality of what she means to him.  They are adorable together and well worth the patience that Jameson shows in winning his lady.

Of course, there is unseen danger surrounding Jameson’s mate, and watching that unfold was gripping and had me flipping pages at the end.  In all, Heart of a Wolf is an intense romance in a slightly different sense with a couple that belongs together with enough sass and sexiness to satisfy any Shifter Romance reader.  I had a blast and I’m looking forward to Will of a Wolf up next.

If you love a well-written romance full of intriguing characters, and chemistry that is off the charts… then Heart of a Wolf is the perfect story for you.