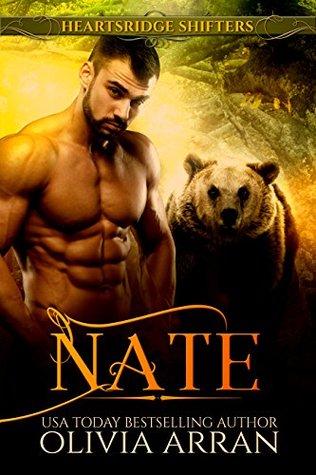 Bear shifter Nate Dean is the joker of team South-One. The prankster. The one without a dozen skeletons hidden in his closet. He is what he is, and that’s always been good enough, until now. Now he needs to be more. To step up and be the person his fated mate needs him to be. He knows he can be the man to heal Heather’s heart, to show her exactly how a woman should be treated and introduce her to a life filled with laughter.

But he’s willing to wait forever, if that’s what it takes for her to realize he’s not going anywhere, that he’d never, ever hurt her. That they’re meant to be together.

Heather Hastings is adjusting to life as a widow. A part of her feels guilty for not grieving her husband’s death, but after everything Toby put her through—the years of abuse, not to mention the endless lies—she can’t bring herself to miss him. In reality, the only thing thing she owes him is a huge thank you for bringing her to Heartsridge, somewhere she’d like to call home. She has real friends for the first time, her son is happy, and there’s a certain man who makes her toes curl and laughter break free from the void inside her chest.

It’s second chance at life. A chance to make her own decisions and carve a place in the world. Though she’s only ever known the dark side of a man’s love before, Nate is a man carved from honor and integrity. His large, muscular body and sinful eyes have all kinds of naughty thoughts popping into her head, often at completely inappropriate times. If she can find a way to let go, take another chance on love, she could have the life she’s always dreamed of. But is she willing to risk her heart again?

When a friend is put in jeopardy and harsh truths are uncovered, the real danger to the town is finally revealed. Heather has some tough decisions to make and Nate has to come to terms with reality: he can’t protect his mate from everything … though he’s willing to risk everything and try.

It’s always a bittersweet moment when a series reaches its finale story.  Oh, we know that there will be more from Heartsridge, we’ll move on to other characters just waiting in the wings for their stories to be told.  Yet this wraps up the South-One Bears portion of what will be connecting series, and I’m sad to see them go.

Heather has come so far from when we first met her.  An emotionally abused wife, now a widow, single parent and a woman coming to terms to the man who was her husband.  The guilt, self-imposed that she carries is a heavy burden and she no longer trusts herself in judgement calls about people, especially men.  She’s made solid friendships among the women, and tentative steps toward liking their mates.  The one remaining single male in this team definitely has her attention.  But she’s scared, she tells herself she’s not ready for a relationship.  That won’t stop her fated mate from being near her, helping where he can and hoping that one day Heather will see him in a different light.  Nate has known Heather was his almost from their first meeting.  He also knew the hell she’d been through with her now dead husband.  He wouldn’t push, but he’d be there a part of her life, enjoying time with her son, Jack, and doing everything he could to make her life easier.  One day, when she was ready they’d have a life together.  He could be patient, he might be the comedian of the group but he knew how to wait for what was most precious to him.

Heartsridge Shifters: Nate is a powerful story with a lot going on.  Some things will be wrapped up, others will emerge taking us into a new direction.  Danger, secrets, action and sexy moments… yeah, this is one series finale that you’re going to want to pick up.  I’ve enjoyed my time in this world, and I’m definitely looking forward to what comes next for Heartsridge.  This is a series that needs to be read in order.  Story themes, characters and events flow from one novel to the next – going back to the beginning is no chore because they’re all amazing stories.  But if you’ve not read any of these stories yet, please read them in order.  I’d recommend this story and this series to any Paranormal Romance or Shifter Romance reader.